During the session, Lieber and Parker discussed ways that writers can create visually-driven scripts, that take full advantage of comics' unique visual vocabulary. Though Parker is now known as a writer, he has a background in art. Both he and Lieber were among the founders of Periscope Studio, a comics collective in Portland, Oregon.

"You want to think concise," Parker said. "Comics is a series of moments, and all you've got is this one little moment. Just one action."

Lieber noted that Parker's scripts for Underground were visually driven, without trying to shoehorn filmmaker effects into the comics medium.

"He thinks visually," Lieber said. "He makes his points visually. When there's a dramatic moment in the script, what makes it dramatic is what you can see visually rather than what's said."

Lieber and Parker also pointed out that many comics writers say they write all of their dialogue first. That might be great for a play, Lieber said, but not for the visually-driven comics medium.

By contrast, "you want to be able to write out the entire comic with no dialogue," Parker said. "You should be able to break down the whole issue in pure action, as though it were a silent film."

Don't call the shots on art

Parker also advised that writers avoid "calling the shots" for artists. He said this is particularly true if the writer does not have an artists' background.

Parker said that for him, this translates to concise panel descriptions, especially if he's worked with the artist before, or if the artist is a member of Periscope Studio, where Lieber and Parker both work.

"Maybe I'll describe a big paragraph at the beginning saying what I want to get out of the scene, and then I'm pretty terse in my descriptions of each panel," he said. "I try to let the dialogue -- when there is dialogue -- carry some of that weight so you can tell what they're supposed to be doing."

Finally, Parker described himself as a firm believer that character is expressed through action, and that visuals can be used to explain and describe character motivations. He said writers should always look for opportunities to use visuals in service of character. 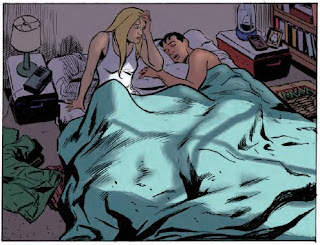 As an example, he said, the first time we see Wesley Fischer, Underground's main character, she is in her bedroom.

Fischer is a park ranger, and Parker noted that "everything she has is made out of camping equipment. She has lanterns sitting up on coolers, and she's lying on a pad with a sleeping bag on it with him. She has no real piece of furniture in the place. Everything is just some repurposed stuff, because she's all about being outdoors, in nature, going out into caves."

Lieber noted that Wesley "hasn't put down roots yet," and that this early visualization tells the reader a lot about Wesley's character, and one of the book's core conflicts.


* How the Underground project came together;
* Lieber and Parker's artistic influence;
* Lieber and Parker's decision to release Underground online, on a donation basis;
* Pacing/plotting in creator-owned comics vs. work-for-hire comics;
* The experience of working in Periscope Studio;
* Collaboration, and how Parker and Lieber handled disagreements;
* Working with retailers, and marketing the book;
* Whether it's better to have a small publisher or self-publish;
* Webcomics as a way to break in and get attention;
* Advice for breaking in;
* And many more.

Underground is currently available in trade paperback form, through Comixology and at www.undergroundcomic.com.

Parker is also the writer of ongoing comics Hulk and Dark Avengers through Marvel Comics. Bucko, a web-comic he created with artist Erika Moen, will be released in print through Dark Horse Comics.

Creators Workshop sessions take place every month, giving members real-world knowledge that will help them succeed in their comics career. Additionally, the monthly Creators Workshop Book Club sessions feature guest writers and artists discussing the craft and art of comics, as well as the business side of things.

-- Posted by Paul Allor
Posted by RobAnderson at 2:56 PM