Rob Anderson, CE Alum and Comics Experience General Manager, was just named as a runner-up in the "Tavern Tales" writing and art competition in Jim Zub's Skullkickers from Image Comics. 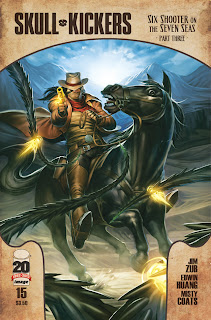 The results were announced in Skullkickers #15 which just hit stands this week.

The "Tavern Tales" contest encouraged readers to submit their writing and art for the chance to appear in the upcoming short stories issue, Skullkickers #18. The winners were Aubrey Sitterson (writing) and Ivan Anaya (art), but four writing runners up were also named, including Rob!

Jim Zub received more than 300 entries in the contest, and more than 250 of those were writing pitches.

"All our writing Runner-Ups had great ideas and Skullkickers-worthy humor layered into their entries," Jim Zub said in Skullkickers #15. "It was excruciatingly difficult picking a winner."

In addition to being General Manager of Comics Experience, Rob Anderson is the writer of the comic book Rex, Zombie Killer, recently published by Big Dog Ink.

Rex, Zombie Killer, along with CE alum Bobby Curnow's Night of 1,000 Wolves from IDW, were the first stories "workshopped" at the script stage in the Creators Workshop to be distributed via Diamond Previews to comic shops.

Congrats to Rob on placing on the shortlist!

And congrats to all the Creators Workshop writers and artists who submitted to the contest. Keep making comics!
Posted by Comics Experience with Andy Schmidt at 11:26 AM