Bunn and Hurtt Join the Workshop to Talk Collaboration, "The Sixth Gun" 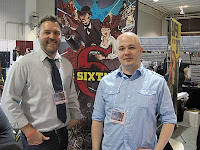 During the workshop, one member asked Bunn about the scripts he writes for Hurtt, and whether the style of script is affected by their strong collaboration. 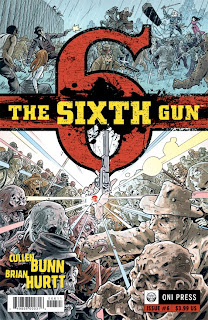 By contrast, Bunn and Hurtt said, many comic scripts are written like movie shooting scripts, with multiple camera angles and specific instructions for each shot.

Bunn said he sometimes notes angles, but that it's understood that Hurtt can go in a different direction, without first consulting him. For his part, Hurtt said he loves Bunn's scripts, and compared reading them to reading a good book.

"You see the images in your head, and you get excited for that," he said.

He also said that the approach lends itself to a greater level of collaboration between artist and writer.

"I've worked with several others writers," Hurtt said. "They were talented writers, and very nice people, but there was no collaboration. They did the script, they turned it over to me, and I drew what was in the script.

"And when I can't be part of the collaboration, and can't be excited, the work suffers. I feel like my best work is when I work with Cullen, because it is collaboration." 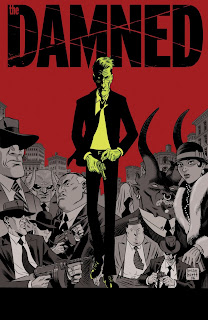 * Transitioning to a full-time career in comics;
* The sacrifices required to build your craft and develop a career;
* The development of The Sixth Gun;
* The importance of setting aside ego when collaborating with an artist or writer;
* Other creative teams that Bunn and Hurtt look up to;
* How Bunn started to get work at Marvel Comics;
* And many more.

Creators Workshop sessions take place every month, giving members real-world knowledge that will help them succeed in their comics career. Additionally, the monthly Creators Workshop book club sessions feature guest writers and artists discussing the craft and art of comics, as well as the business side of things.

There's still plenty of time to sign up before the next session. We hope to see you there!

[Photo of Cullen and Brian above by Jeff of Draw Me In.]

Posted by RobAnderson at 9:28 AM