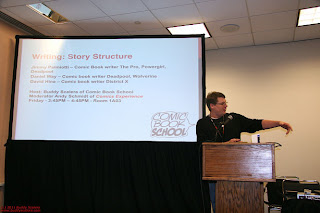 New York Comic-Con 2011 is now behind us, and what a great convention it was for the Comics Experience community!

We had more than 30 members in attendance, many of them exhibiting. We thought we'd share some of our highlights, as well as some thoughts from a few of our members! 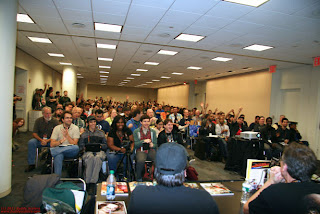 On the convention panel front, Buddy Scalera's "Comic Book School" panels were a hit with creators, covering just about every aspect of the creative process. 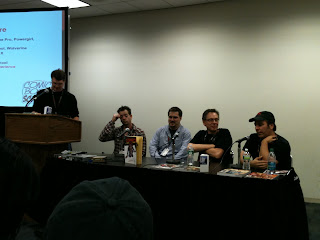 Meanwhile, on Friday night, Workshop member Brandon Seifert was a panelist on the well-attended Ain't It Cool News Horror panel, dicussing his runaway hit from Image/Skybound, Witch Doctor. We can't wait to see more from you, Brandon!

Speaking of panels, during the Breaking In panel hosted by Scott Allie (Dark Horse) and Matt Gagnon (BOOM!), Comics Experience alum and Workshop member, Paul Allor, got an unexpected shout-out. Scott began discussing how a particular writer had recently gotten his attention by sending his new trade paperback to many editors at Dark Horse. Scott turned to Matt and said, "I bet you know who I'm talking about," and Matt replied "I sure do, everyone got it at BOOM!, too". When they discovered Paul was in the audience, he received a round of applause from the audience, as Paul held up a copy of the trade paperback in question, Clockwork, Volume 1. At which point, Scott Allie said "Paul should be up here teaching this panel." Nice job, Paul!

Friday night, Mulligan's, the old Marvel hang-out, was the site of the Comics Experience Meet-Up, attended by many alums, Workshop members, and friends. We took over a good bit of Mulligans into the wee hours, with much food, drink and comics talk. Here's a few pictures, which we'll also be posting to the Comics Experience Facebook page soon. 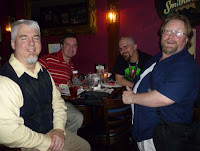 But enough from us! Let's hear from some of those Comics Experience alums and members.

Amy Chu:
"NYCC was one of the more surreal experiences I've had (in a good way, of course). I would say we had an outstanding first time convention experience, largely due to meeting a number of Comics Experience people for the first time and getting to hang out with everyone. 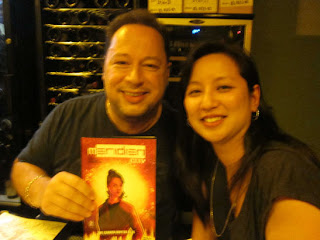 "Georgia Lee and me having dinner and drinks with Axel Alonso, Joe Quesada, and CB Cebulski, as part of the "Dinner with Marvel" event, had to be right up there on the list. CB and Joe were also nice enough to invite us to go with them to the iFanboy party Friday night. Also, meeting Mike Marts from DC was a highlight.

"Pretty much all our goals were met, and then some. Reconnected with other creators I met and liked from SDCC and C2E2, got our book, Meridian, into the hands of some key people, and met a lot of other writers."

Paul Allor:
"This was my first major convention, and I had a great time meeting with editors and fellow creators. There are so many extroardinarily talented people in this business, and I left feeling energized to create more comics!"

Rich Douek:
"I had a great convention... I sold about 30 books, and had great conversations with editors from Archaia, Dark Horse and BOOM! Studios. Definitely helped me figure out where to go next with Gutter Magic."

Janine Frederick:
"I made new connections with creators I'd never had the pleasure of meeting before, and discussed my project, Awaken, with people at Oni Press and Avatar Press. I also discussed with Dan Didio the possibility of having him at a future speaking engagement at Monmouth University!

"Having Awaken at the table gave me the ability to assess the reactions of all different people who were curious enough to look at the 5-page preview or ask about the story. The largest positive response came from the female 20-something crowd. The second most "into it" crowd were males in their early to mid 30's. Awesome... I now truly know the demographic for this story and plan to start a Kickstarter campaign."

DaFu Yu:
"I enjoyed meeting fellow Comics Experience alumni and reading each of their unique comic books. They have inspired me to continue to do my best when I create my own comics."

James Murray:
"My highlights include shaking Stan Lee's hand, talking with Troma's Lloyd Koffman, and with Len Wein, lots of networking, and meeting Andy and CE folk in person for the first time. And, in general, I was happy to be back in NYC for the first time in 5 years. Had a few good nights out seeing great music on Bleeker street, too."

Jason Cutcher:
"Met Daniel Cooney, who was my comics writing teacher at the Academy of Art University. He's a guy who is really making it as a small press publisher, with Valentine and Tommy Gun Dolls. He's been distributed through Diamond for 10 years, and has a movie option. So meeting him and getting some words of encouragement on my projects really went a long way. Also, had fantastic discussions with Archaia regarding two projects, met Lauren Sankovitch of Marvel, and spoke with a Diamond Vendor representative."

Joey Groah:
"Meeting and re-connecting with CE forum members totally made the con. Too many moments of thoughtfulness and camaraderie throughout the weekend to list. The "rising tide" mentality of people in our community is evident.

"And being able to talk business with members too, in terms of how to approach exhibiting at a con and how that could affect your publishing plans and products. I appreciate the chance to hear how people are looking at the business side of comics in addition to the creative work.

"Personally, the feedback on my pitch comic, Dry Seasons, was flattering and encouraging. And now I'm re-writing pitch documents..."

Paul Littell:
It was great to meet several Comics Experience members in person for the first time, and to get to say hello to others again. I met at least a couple of members with whom I look forward to collaborating. I picked up a lot of good stuff at Andy’s panel, and at the other panels run by Buddy Scalera. He runs a great show, pulls great guests (like Andy), and always sends you away a lot more informed and maybe sometimes a little smarter. I also made a point of saying hello/starting a relationship with editors at several publishers. So, all in all, I’d have to call it a big success."

Jeff Marsick:
"I had a fantastic con with record-setting sales on two of my properties, Z-Girl and the 4 Tigers and the series debut of Dead Man's Party, which on Saturday actually outsold all five of my other offerings. It was an ego boost and a validation of my creative teams' talent and quality of product when a marketing exec at a major publisher, a well-known pro like David Mack, and even a Diamond rep stopped by (all unsolicited), checked out the books and said 'Wow. This is really good stuff.'"

George O'Connor:
I was hoping to meet editors at Oni and Archaia and was able to do that fairly early on. Both Charlie Chu (Oni) and Rebecca Taylor (Archaia) were very helpful and easy to talk to about their submission guidelines. As a bonus, I got to meet Stephen Christy from Archaia later in the weekend and again, just a really nice guy. My friend Matman from Secret Identity Podcast introduced me to Sarah deLaine from Image and we had a great conversation about comic book marketing. And I got to catch up with Lauren Sankovitch at Marvel, who not only secretly runs the joint but is a very sweet person, too. Creator-wise, both Jim Zub (Skullkickers) and Justin Jordon (Luther Strode) were incredibly generous with their time as we talked Image, books, and marketing. And, finally, I have to give huge thanks and credit to my fellow Comics Experience members who helped Healed sell out by the end of the Con. All-in-all it was a very successful show.

Joe Sergi:
A few of my favorite things: seeing everyone at the Meet-Up -- it is great to put faces to the Workshop forum; selling out of Great Zombies in History 1 and 2; watching Dan Slott reenact the Marvel movie panel at Jim Hanley's Universe after the show one night; being interviewed by podcasts, vodcasts, and newspapers about our books; having someone who bought books earlier come up to me during lunch to tell me how much they liked my stories, and racing through the streets of DC at 4 am with Rob Anderson as we went home."

Great convention, everyone! See you at the next one!