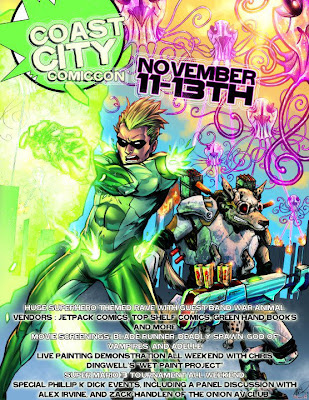 This November 12th and 13th, a dream that we had as fledgling comic shop owners is coming to fruition! Finally, after all these years, we will be hosting what we believe to be a real celebration of comics in all their glory: a true comic con!

Our inner nerds can barely contain themselves as the 1st Annual Coast City Comicon finally takes flight at the historic Eastland Hotel in downtown Portland, Maine.

It has always been Coast City Comic’s mission to support not just the mainstream, but the local/indie talent as well. This convention will maintain that same attitude; a real DIY event celebrating comics, pop culture, science fiction and vintage video games.

There will also be a Self-Publishing 101 panel that was initiated and will be moderated by Comics Experience alum and Workshop member, George O’Connor. Many very talented locals and Comics Experience members will be part of this informative discussion on publishing one’s own work in today’s comic market. 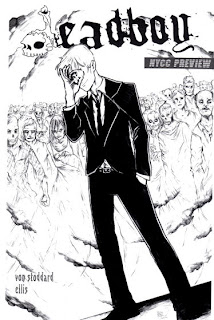 In July, I joined the Comics Experience Creator’s Workshop, mainly due to being so impatient as I waited for the Intro to Writing class to begin. What I did not expect was to be welcomed so openly and warmly. It was here that I began to work out my first creator-owned comic, Deadboy.

Members were brutally honest and helped me give shape to the idea, and as a result, the first issue will be debuting at the Convention. I have also begun work with Workshop member, Ken Frederick, on a project titled AM.NESIAC and hope to be debuting our 6-page pitch as well. His awesome artwork can be seen as part of Workshop member Paul Allor’s creator-owned project, Clockwork.

In response to such support, I wanted to do something to give back what has been so freely given to me, so I have opened up a section for Comics Experience alumni and Workshop members to show off their creator-owned books at my expense. So far, our Comics Experience guests will include: Amy Chu (Meridian), George O'Connor (Healed), Janine Frederick (Awaken), Joshua Dahl (Rapid City), Ken Frederick (AM.NESIAC), and Rich Douek (Gutter Magic), in addition to Comics Experience founder, Andy Schmidt. If you’d like to come and be part of the Comics Experience Workshop tables, feel free to grab your schwag and head up to Maine and join us.

The festivities will be kicked off on November 11th with a special Nerd Rave featuring Portland sensation Waranimal at Space Gallery. There will also be a Drink and Draw at a local pub and all are welcome to attend. It will be a great way to meet some awesome local talent here in Southern Maine.

We’ll also be hosting the premiere of the remastered 35mm cut of Blade Runner in celebration of the release of Exegesis by Houghton Mifflin Harcourt and giving away all sorts of Phillip K. Dick books as door prizes! There will also be a PKD panel discussion with writer Alex Irvine, Zack Handlen of the Onion AV Club, Sam Pfeifle from the Phoenix, and others!

I hope to see as many of you as can make it. Just bring your awesome self’s and we will take care of the rest!