GUEST BLOG: What George O'Connor Learned from the Convention Circuit

In this guest blog, writer George O'Connor, Comics Experience alum and Creator’s Workshop member, talks about the most important lesson he's learned from the comic book convention circuit this year.

Here’s what I learned from exhibiting at ten conventions this year:

If you dream of making a comic, DO IT!

Please, trust me on this. Get your butt in gear, make your book, go to some shows and DO IT. It’ll be so worth it. 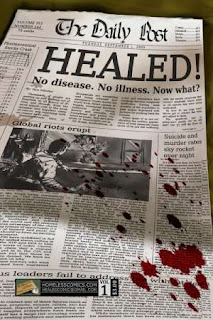 For 20 years now, I’ve been doing DIY projects: CDs, short films, web series -- and doing the comic book Healed has been the most rewarding creative endeavor I’ve had yet. Comic book people just seem to be the nicest people and if you have a book that interests them, they’ll support you.

Maybe it’s the structure of comic conventions? Or that fans of the medium walk in with an open mind and WANT to find something new? Maybe it's because comics aren’t mainstream "cool," so we all band together to support each other. Maybe it’s the low dollar entry point, where people feel comfortable taking a chance for $2-$4? And maybe it just doesn’t matter.

Through Comics Experience, I’ve met dozens and dozens of creative people who have great stories and visions –- many I get to call friends –- and I want them ALL to experience the confidence, excitement, and enthusiasm I got to feel this last year... 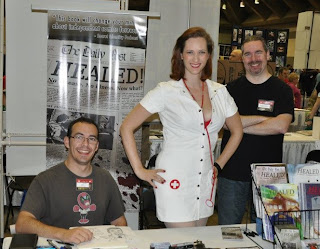 I want ALL OF YOU to experience that. There is nothing like it in the world. And there has never been a better time to make your book and get out there.

Print-on-demand services make small print runs possible. You can bypass the whole printing process completely and put your book on the web or available through Graphic.ly. And if you’re part of the Comics Experience Creators Workshop, you’ve got an incredibly supportive group to fall back on and learn from. (Look, I’m not just shilling Comics Experience; it’s the honest truth).

Do it. Do it. Do it. Use my little wins as the fuel to get out there and make your own victories. Talk to other creators and learn from them and get excited. There’s no reason to wait. You don’t have to get anyone’s permission.

If you have a story to tell, there’s someone out there that wants to read it. And there is no better feeling.

That’s what I learned from going to ten cons this year and I want to see YOU behind the table with me in 2012!

George likes to write. A lot. He’s currently writing the ongoing comic series, "Healed," for Homeless Comics and has contributed stories to several anthologies published by Elevator Pitch Press. He was also the creator behind the webseries "664-The Neighbor of the Beast." And somehow he also juggles playing guitar in his metal and punk rock bands. By day, George is a mild-mannered copywriter in the advertising world. He once put a truck on the moon.