Pérez, Christy Discuss the Artistic Techniques Behind Tale of Sand

Tale of Sand has been praised for its highly distinctive art, which relies heavily on contrasting styles and intricate layouts, while still delivering clear storytelling to bring Henson’s surreal, existential tale to life.

During the workshop, Pérez and Christy discussed some of the artistic techniques used to create this modern masterpiece. 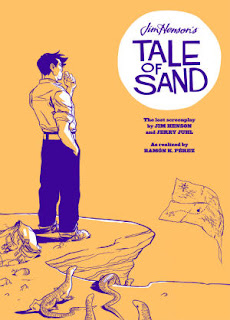 Pérez said that for the book’s shifting art styles, he thought back to his early days reading Manga, where “they would often break away from an art style in their stories for dramatic effect. They would change the art style to either embellish a moment or make a moment stand out.”

So, Pérez approached Tale of Sand the same way, using three basic modes: linear inks, linear inks with tones, and painting. For the atmospheric scenes, he said, he would use painting, and to make a moment stick out, he would add tones. The rest of the time he stuck to a more basic rendering of the characters.

Within these three broad areas, Pérez would make other adjustments, depending on the mood he wanted to convey. For example, in one section of the book, Mac, the main character, is being chased through the desert by a football team and a group of Arabs.

“The moment was so ridiculous that it felt like something out of an old Looney Tunes cartoon or a Tin Tin graphic novel,” Pérez said. “I wanted to treat it a little more slapstick in terms of how we rendered the character, how we created a big cloud with knives and swords poking out of it, that kind of thing.” 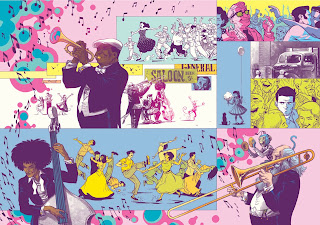 Using color to create a symphony

Similarly, Pérez and colorist Ian Herring used the book’s coloring style and palate as another way of influencing mood. Most of the book kept a simple color scheme, but the palate was increased for important moments, and changed to “evoke day or night, color or calm,” Pérez said.

“We were really using the color as music and also mood throughout the book,” he said. “It was an interesting experiment. At one point we had all the pages up using Adobe Bridge, and we would actually follow through almost like a musical concerto, following the colors, the riffs,” Pérez said. “We tried to make sure it flowed, with highs and lows, sort of like a symphony.”

And there are only two scenes in the book – in a sheriff’s office and a bar – where a full palate is used.

“For me, the reason behind that was those were the only two real places,” Pérez said. “They were the places Mac felt the safest. So they were approached in a real color, real world kind of a way. They weren’t an abstract of the world.” 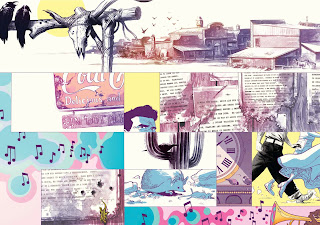 Pérez said that he often uses extreme angles in his work, and enjoys doing so. But most of Tale of Sand is portrayed at eye-level, with only a 30 to 45 degree angle of difference.

The reason, Pérez said, is that he wanted to make the book easy for non-comics readers to pick up and enjoy.

“I remembered my dad, when I was a kid, picking up a comic book and going ‘how the Hell do I read this thing?’ twisting and turning it around.”

Because the book uses some intricate panel layouts, Pérez said, it became even more important to keep the camera angles “calm and simple,” to avoid confusing or losing readers.

“The other cool thing is, that’s probably the angles (Henson) would have shot the movie at,” Christy noted.

Pérez agreed, noting that in most of Henson’s work, “he doesn’t really go to extreme angles.” 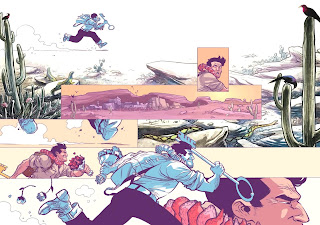 Tale of Sand has a large cast, and one distinctive feature of it is that each character had a distinct personality. From a small-town sheriff to a snooty maître-de to a man carrying an ice cube across the desert before it melted, Pérez took the time to flesh out every character throughout the book.

Pérez said that most of the characters had one or two lines of description in Henson’s original script. While developing the character, he tried to think about who Henson would have cast, if the screenplay had been produced when it was written in the 1960’s. For example, he imagined Mac as a young, Magnificent-Seven-era Charles Bronson. But this technique was just a means to the end of giving each character his or her own unique personality.

Pérez advised other artists to do the same: “Whether it’s just some c-list character in the background, try to give them the best part you can to really sell the scene.”

Christy said Pérez’s work in this area was a major part of making the story feel grounded and real.

“I would go as far as to say that the genius of this guy (Pérez) is that if you go back and look at the book, every single character in the book, in the background, has some piece of business going on,” Christy said. “It’s like when you’re directing extras on a set, the good extras that know what they’re doing, they will have pieces of business that they’re doing, they will know what conversations they’re having.

“So much of Ramón’s genius is that these all feel like real characters. They all have their own inner thought process. There are so few artists that do that. There are very, very few artists who actually take the time to think that through. And people notice when you do that. It’s something special.”

These were just a few of the topics discussed during the book club. Others included:

* How the book came about, and how it was pitched to the Jim Henson Company
* Working with the Jim Henson Company on the adaptation
* How Pérez handled the adaptation, and the challenge of telling such a surreal story
* Collaboration and communication
* The book’s unique lettering
* Sound effects and the philosophy behind them
* What lessons creators should take away from this book
* Advice on pitching a licensed book
* Advice on breaking in to the industry
* Upcoming projects for Pérez

--Posted by Paul Allor
Posted by RobAnderson at 4:00 PM