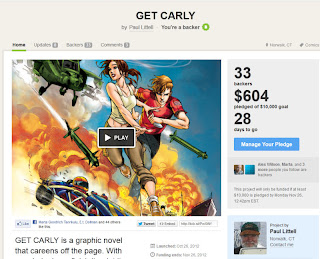 Creators Workshop member Paul Littell has launched a Kickstarter campaign for his comic project Get Carly.

The script was workshopped on the Creators Workshop, and Paul even kindly mentions the role of Comics Experience in his Kickstarter description.

The story is an action-thriller about Marco, a shy techie-type, who finds himself racing across Kosovo in a laydown racer to save a beautiful woman. 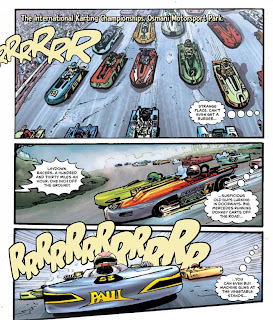 Laydown racers can go over 130 miles per hour, just inches from the ground -- and Marco is being pursued by some very evil men...

Paul's Kickstarter is to produce a 110-page graphic novel, and, if stretch goals are reached, can be given additional life with animatics/motion comics as well.

As of this writing, only two days into the campaign, the Kickstarter has already garnered more than 30 backers toward its overall $10,000 goal.

In addition to the book itself in print and digital form, those pledging can receive other incentives including special character profiles and sketches, color prints, slipcase editions, ring tones, a Get Carly peace belt, or even be drawn into a group portrait with the cast!

With more than twenty-five days left as of today, there's still plenty of time to jump on this Kickstarter!


Best of luck to Paul with the Kickstarter!