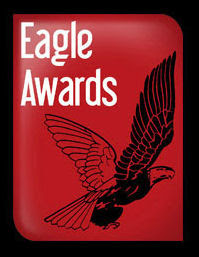 On January 27, 2012, the Eagle Awards and MCM London Comic Con announced a new competition for comic artists and writers.

The "Huntsman's Challenge" competition called on comic creators to submit a completed five page story, in color, with a plot relevant to a dark fantasy setting. The catch? All submissions -- of finished stories -- had to be submitted in a month, with a deadline of February 29th.

Despite the short deadline, members of the Comics Experience Creators Workshop community were up to the challenge, with no less than FOUR members submitting completed stories!

Since the winners haven't been announced, we're only going to share quick peeks at early character designs or panels representing each story, but it looks like a very interesting range of dark fantasy stories were submitted!

Here are the entries from Workshop members (in alphabetical order by title):

The Judges will select two winners: one for best design and art, and another for best writing. Both winning teams will be nominated for a new Eagle Award, the MCM Expo Award For New Visionaries and have their story included in the MCM London Comic Con show program. Both winners will also be invited to the 2012 Eagle Awards ceremony and after-party, along with industry passes to the full London Comic Con weekend.

We wish everyone the best of luck in the competition!