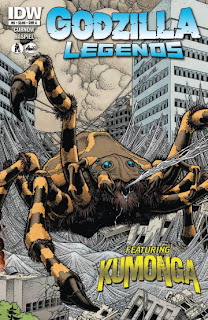 Writer Bobby Curnow has a new book on the stands today: Godzilla Legends #5!

Godzilla Legends #5 has a story written by Bobby with art by comics great Dean Haspiel. In the story, an old adventurer comes out of retirement to climb Godzilla!

The issue is on stands right now with covers by both Art Adams and Bob Eggleton.

Bobby's new creator-owned miniseries, Night of 1,000 Wolves, is solicited for pre-orders in the current March Diamond PREVIEWS catalog and will be in stores in May. That title features artwork by Eisner-nominated artist Dave Wachter.

Congrats on your Godzilla tale hitting the stands, Bobby!
Posted by RobAnderson at 2:38 PM