One week before the big launch of the TRANSFORMERS ongoing series that I’m working on with writer Mike Costa and artist Don Figueroa, IDW is releasing TRANSFORMERS: CONTINUUM which is a book I wrote based on the work of the last three years worth of Transformers writers and artists. I’m not claiming to have done anything genius here as it essentially recaps the past events in all the books. That said, if you like Transformers and the new book interests you, then this is for you! 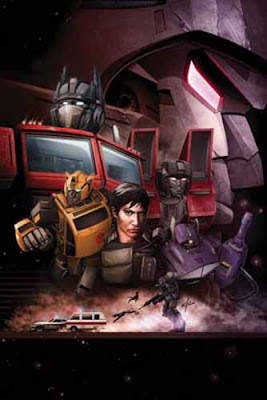 I will give you some insight into this project from the writer's perspective, if you're interested. This was an extraordinary challenge. Condensing three-plus years of complex and often unclear continuity into a special like this was incredibly difficult. Deciding what to leave out and what needs to stay and how to rephrase things so that the meaning is clear even if the events aren't exactly how they happened is tough.

This was perhaps the most difficult writing assignment I've had to date and I wish we'd had another week or two to massage out the kinks that are still visible.

One thing I try to impart to my students in the Comics Writing and Comics Art classes is to view learning as a success. And to view challenges that one overcomes as a success. So, I look at this project and I know it works. And I know that in reading 75 or so comics and trying to distill the events and characters of each issue into two or three captions was a task I had never attempted before. It's a whole different style of writing than I've done before. So, to my mind, I learned a lot and so, for me personally, there's a lot to be proud of.

But instead of dwelling on how challenging the project was for me, let me talk a bit about what I think really does work. I was able to pick up some of the themes and character traits that will be explored in the new ongoing series and moved some of those to the foreground in CONTINUUM giving just a subtle taste of what lies ahead for the Transformers in the ongoing. Nothing to overt, but it’s there. And ultimately, that’s why I wrote the book myself—no one else seemed to want to write it and I had access to what was coming up so, to whatever extent, I could tailor it to that end.

Additionally, it does boil down 75 issues into a single issue. Some events are glossed over more than others and some story elements are condensed into one for ease of reading. For example, there are two organizations that weave throughout several issues. They're called the Machination and Sky Watch. I made the decision just to reference Sky Watch because it worked for the narrative and a new reader (and that's who this is published for) really doesn't need to know anything about the Machination for a while. So, I just went with Sky Watch in the recap book. I'm sure die hard fans will notice and think I've deleted something from their continuity, when really, all I did was downplay it. This book doesn't rewrite events. It's a primer for the new series.

So, as much as I learned on this one, I think the project is a success. It accomplishes what it set out to do--but with every project--I just wish we had more time to smooth it out even more. This was one big step in my writing journey and I hope if you pick it up, that you enjoy it.


The previous creators, especially Simon Furman and Shane McCarthy have told some incredible stories and turned a lot of heads. I hope they feel I did their work justice. The book features a brand new cover by artist Ken Christensen and is 32-pages of content.

As always, thanks for reading and I hope you enjoy the book.

Posted by Comics Experience with Andy Schmidt at 1:12 AM