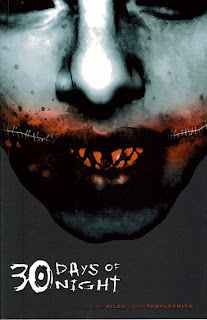 I figure I’ll occasionally talk about what comics I’ve been reading lately. As noted on the November 5th entry, I was recently reading “V for Vendetta”… yet again. But that’s not what I’ve been reading for the last week or so. On Halloween weekend last week I started reading the first “30 Days of Night” collection.

Now, one week later, I’ve read every collection save one—the last one published, “30 Days ‘Til Death” but I’m sure I’ll finish that by Wednesday. There were a couple of reasons I jumped onto these. #1, I haven’t read anything horror related in a while and it was Halloween after all. And #2, I have worked at IDW Publishing for over a year—it’s probably about time I got around to reading the book that put them on the map 10 years ago!

I’ve recently been working with “30 Days” co-creator and artist Ben Templesmith. He’s just completed the artwork on G.I. JOE: ORIGINS #12 (out this February!), an issue featuring the Baroness! 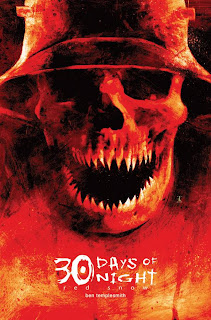 Anyway, to be fair, I don’t read a lot of horror. I don’t see a lot of horror movies. So, maybe it’s just not the genre for me. But that’s not really fair. I just don’t like horror that isn’t well done—where the craft isn’t there.

I recommend the first and third books: "30 Days of Night" and “Back to Barrow.” Not that the others are bad, but these two along with “Red Snow” seemed to be the best of the bunch.

The reason I enjoyed them more than the rest was because of the honesty. There were real characters in them. The situation flowed logically. But beyond logic, I got to know some of the people who lived in Barrow, Alaska. I started to care for them. Oh, and then the vampires showed up.

I spoke with Ben the other day about the books and I told him I got a feeling that reminded me of John Carpenter’s version of “The Thing From Another World” and that I loved that movie. He laughed and told me that was his intention. Turns out he loves that movie too. That was a nice little surprise. 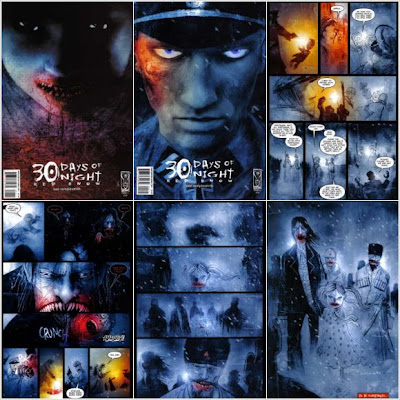 My point is, horror--like any genre--comes down to the execution. How well are the world and its rules established--are they followed at all times? Do the characters behave in a logical and consistent way or are they separating themselves off from the group so they can be picked off one by one? "30 Days of Night" manages to create real characters who act in a way that makes sense if the proposed situation were real--and that MAKES it real for the reader.

If you like good horror comics that are well told and make sense in the world that they create, then there are some really great stories to read here. If you’re just not a fan of horror, never mind.

I was relieved to find out how good most of the “30 Days” stories really are. And made me just a bit happier to be working at IDW: a company that took a chance on a vampire property and watched it succeed because they let good creators do great work.

Up next: More Alan Moore! I just got his Superman work in a collected edition. Can't wait to dive in!

Posted by Comics Experience with Andy Schmidt at 12:17 AM