The First Comic I Ever Read 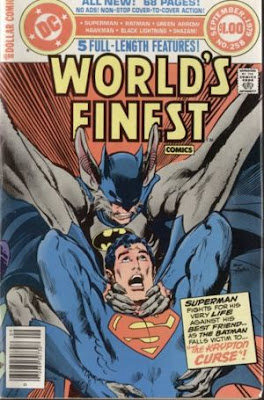 “The World’s Finest” #258 was the first comic I remember ever reading. As I said in one of my earlier entries here, I’ll occasionally be talking about my love affair with comics. I’ll be honest, other than the fact that Neal Adams did the cover for the issue and that I believe Denny O’Neil wrote the lead story, I don’t remember a whole heck of a lot about the issue.

I do think Batman did turn into a bat creature and fight Superman as the cover implies. And let’s face it, that’s the kind of awesome craziness you just don’t fine in many other places than comics.

My early memory of the issue is that I think my older brother Craig owned it and he’d let me read it and I thought it was awesome. Neal also drew the cover to a phonograph record collection of Batman stories that we wore out a couple of times over. I found the cover to it altered here to read “Bat Blog.” I’m pretty sure that wasn’t the tile of the actual record back in the mid-seventies.

I didn’t realize until much later in life how influential Adams’ artwork was on me and my love of comics. I certainly enjoyed his work, but also the work of many artists who were inspired by him. Later, I would be fortunate enough to get to work with Neal. While I was at Marvel, I called him up cold and asked if he’d do a cover for me. Much to mu surprise, he said yes. Then I had to go fine one! After that, he did several more for me while I was there and we almost got a six-issue series off the ground, but it wound up falling through. Ah, well.

Also, of interesting note is that “The World’s Finest” #258 was written by Denny O’Neil who I would also have some really great dealings with later in my life. When I was teaching college courses for Webster University in St. Louis, I called O’Neil and asked him if he’d consider flying in to talk with my class. Turned out his wife had graduated from Webster and so they were happy to come. I spent a couple of days hanging out with the O’Neils and talking shop. 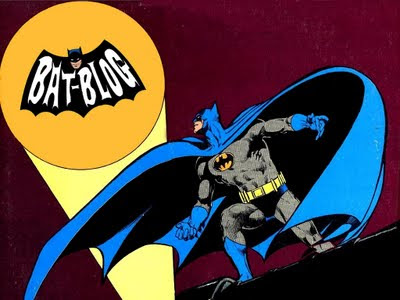 He flat out told me not to get into comics. I told him that if the industry was dead in ten years as he predicted, that I’d find another passion at that time. He was nice enough to hook me up with a face-to-face interview with Mike Carlin, then DC Comics Executive Editor and get me an interview at Marvel as well (he and Marvel Editor-In-Chief had co-created Azrael for DC Comics a couple of years prior).

Even though I had interned at Marvel, Denny got me back in the door again. It was that trip to New York that led to my getting hired at Marvel as an assistant editor back in 2002.

So, just a little weird how that turned out. First comic I remember reading, and eventually, I wound up with great experiences with both of the comic’s creators. I’ve heard hundreds of similar stories about the comics industry. It seems to me that our little nook of the entertainment industry is just far enough a field, even now, that it’s a darn nice place to work. The comics industry has a lot of good people in it and I’m lucky to be working with them.