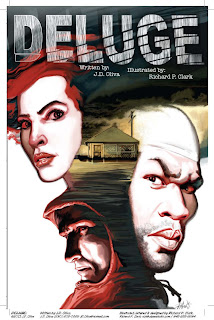 Growing up the only things I had ever dreamed of were making movies and writing comics.

Like most teenagers in the mid-90's, I fell out of love with comics, but came back in the mid-2000's. Soon after that, my love for writing comics returned and I immediately started pitching ideas to any and every company I could. And I failed with each and everyone.

It soon became apparent to me that I wasn't doing things the "right way." What I mean by that is I wanted to be a comic writer but I had no clue how to get my start. As I learned, most comic companies don't take blind submissions, nor will they take a risk on an unproven writer. They wouldn't talk to you unless you'd been published, but how could I get published? I was confused and frustrated. 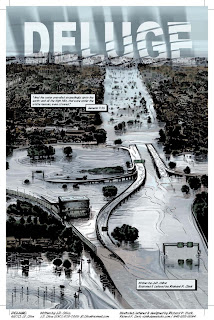 I joined Twitter in 2009 and started following some of my favorite creators and editors. I started to get a greater understanding of the business.

Then came the day that changed my life. I saw that Andy Schmidt was taking his Comics Experience courses and bringing them online. This was the perfect opportunity.

In Andy's six week Into to Comic Book Writing course, I learned more about the comic industry and the craft of writing than I could possibly have imagined. It was easily the best $500 I had ever spent. By the end of the class, not only had I completed a 5-page script, but I actually published that story in my class's Tales From The Comics Experience anthology. But the biggest impact was that I now had fourteen new friends and collaborators who shared my goals.

When the opportunity arose to join the Comics Experience Advanced Writing course, it was a no brainer. As part of the advanced class, we were tasked with creating a full 22-page script. During that first advanced class, I was struck by an idea that had been banging around in the back of my head for a couple years. 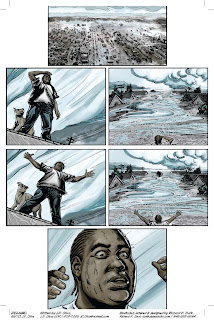 In the summer of 2008, I spent a month in New Orleans working on a short film. I was amazed at the level of devastation that was still present so many years after Hurricane Katrina tore through the Gulf region. One night, while out in the French Quarter, I saw a police officer smash his nightstick against a drunk man's jaw. I had never seen such use of excessive force, especially so out in the open. I was even more floored by the way the people of New Orleans didn't seem to care. It was almost as if this kind of thing happens all the time. (Turns out it does).

Later that night, my director of photography told me a story that he had heard. After the storm, apparently a group of disgruntled cops took to the flooded streets in motor boats and were actually gunning down the criminals that were stranded on their rooftops. "That would make a great story," was my first thought, and for a couple years after, I would kick the idea around for a bit but couldn't find the right hook to make the idea work. While I was horrified by how excessive those police were, I feared that there wouldn't be enough sympathy for these criminals. Then it hit me, "what if the main character is an undercover FBI agent stranded in New Orleans?"

With that revelation, the characters began to take on life and with the support of Andy and my classmates, I created the first issue of what I envisioned as a three-issue miniseries. I was surprised at how well my classmates and Andy himself responded to the material. I even received a pretty favorable script review from Peter David as part of the new Comics Experience Workshop. Encouraged by this, I decided to make the story, entitled Deluge, a priority. 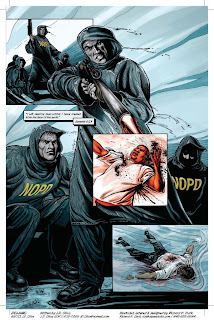 My first act was teaming up with Richard P. Clark, a fellow classmate who happened to be a professional artist. Rich's realistic style was a perfect fit for my story and I decided to make a pretty solid investment and hired Rich to design a pitch package.

When Rich delivered the pitch package, I was blown away by his work. I thought it was only a matter of time before I had my first miniseries in comic shops across the country. Of course, reality slapped down my idealism. (Or naiveté?) Our pitch was turned down by just about everybody and, of course, I just figured it was because I sucked. I knew it wasn't Rich's art, so it had to be me. But I kept on and eventually I found a brand new publisher who was willing to take a chance. So that was it, I am in the door, right? Not quite.

Andy had dropped the bombshell on us several months earlier, so I knew that if Deluge was ever picked up as a creator-owned title, I was going to have to pay for the book to be produced. Knowing what this was going to cost, I always figured it was a problem for "Future J.D." and he would figure something out. I don't think people realize that Creator-Owned Comics are Creator-Funded comics. Even if Image had picked us up, I would still be in the same predicament.

Well, here I am, with the opportunity I've dreamed about for years and the only thing slowing me down is money. But isn't that what's stopping just about everybody? 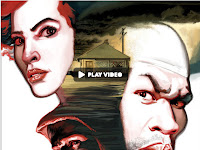 So, what Rich and I have done is launched a Kickstarter campaign to try and fund half of the book's budget of $6,000. Coincidentally, according to the Kickstarter panel at New York Comic Con, that is also the average amount raised for comics on Kickstarter. Naturally, I figured it was finally the time when being “average” would be just fine. And again, reality steps on my head.

Here we are with just over one month to go on our Kickstarter and we're not quite 25% of the way funded. Which is frustrating because if we can't reach our goal, we don't receive any of that pledge money. Needless to say, I'm a little nervous as we're drawing toward the close.

As gut-wrenching as the waiting has become, I can't help but feel happy and proud at how far I've come in such a short time and how much I really owe to Andy Schmidt and Comic Experience. It literally changed my life.

To check out the Kickstarter campaign for Deluge, click here!