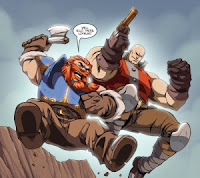 Skullkickers, an ongoing title from Image Comics, is known for its fast-paced action and wild fight scenes.

Zubkavich noted that Skullkickers moves along at a quick clip, as his main characters move from one violent situation to another.

But Zubkavich also noted that many people struggle with fight scenes, and offered some advice for making them work. 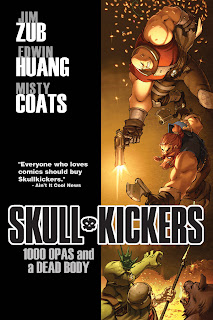 1. Use the environment to provide interesting details

Zubkavich said he tries to write fight scenes that rise above “punch a guy, kick a guy,” by using objects and details from the environment to create interesting fights, whether they’re killing a werewolf with a silver spoon, or knocking a pot off a goblin’s head.

“It’s all about using the environment, and using the opponents, in interesting ways,” Zubkavich said. “How can these characters interact?”

2. Build toward something on every page

Zubkavich said that he’s fairly methodical about the pacing of Skullkickers fight scenes, and tries to have something important happening on every page of action, providing a good payoff for the readers.

As times this is a huge moment, a splash page or even a double-page splash. But, he said, it could also be a character getting knocked out, or a “big ridiculous moment.” The point, he said, is to keep the audience attached to the big visual moments, and give them something to remember beyond just “and then he punches a guy, and we’re off to the next scene.” 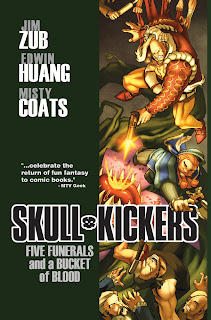 3. Think visually, but recognize that comics are a partnership

Zubkavich noted that due to his background in art and animation, he visualizes the fight scenes as he is writing, staging them in his mind. In the scripts, he tries to give artist Edwin Huang all the information he needs, while still giving him room to build upon the script if he so desires.

At the same time, comics are generally a collaborative medium, with the exception of creators who perform every job. And so, Zubkavich said that “once you get the artwork, you adjust your expectation, usually in a good way.”

Fight scenes were just one topic discussed by Jim Zub in the two-hour question-and-answer session. A recording of the full session will be available to workshop members for the next few weeks.

And you can read more about Skullkickers or order your copy at www.Skullkickers.com.

For our next live Workshop session on Tuesday, November 29, 2011, special guest Mark Waid will be on hand to discuss his thoughts on the "digital revolution" in comics, as it relates to people creating new works today.

Then, on Tuesday, December 6, 2011, writer/artist Terry Moore, will be joining us for a Creators Workshop Book Club discussion of Echo, The Complete Edition. Terry Moore is a legendary creator who writes, draws and publishes comic books through his own imprint, Abstract Studio.

-- Posted by Paul Allor
Posted by RobAnderson at 12:01 PM