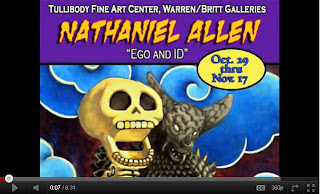 In this guest blog, Nathaniel Allen, an Assistant Professor of Art at Alabama State University, discusses why he joined the Comics Experience Creators Workshop and enrolled in the live, online Introduction to Comic Book Art course.

Nathaniel recently posted an intriguing, one page "Workshop Challenge" story, titled "A Lighter & A Knife," shown in full below, which led to this Guest Blog post!

In the summer of 2011, I enrolled in the Comics Experience Creators Workshop to learn how to draw comic books. 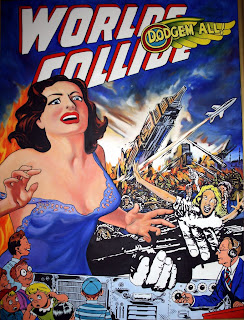 A lot of my artwork has been influenced by comic book and advertising art. Suddenly, last summer, the obvious became crystal clear. After years and years of flirting with comic book art, doing paintings mimicking comic book-influenced techniques (in an attempt at a postmodernist critique of America's consumerist culture,...etc.), it hit me to finally do the obvious thing -- learn to draw sequential art; the stuff that got me interested in art in the first place.

I had come across the Comics Experience website at some point before the summer began and thought it looked interesting, but I had just discontinued taking an online class in the classical realist techniques and I was a bit skeptical about getting back into another one. 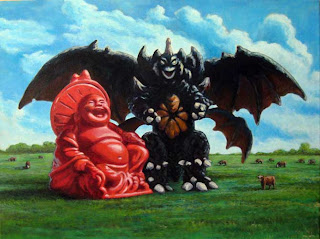 Then Heroes Con rolled around, and having got permission from my wife and daughter to attend, who do I meet but Rob Anderson? I had just randomly come across some post by him weeks earlier on Facebook about a new comic book he was publishing that had a zombie-fighting team of animals that included a talking dog and a baseball bat-wielding gorilla. I remembered commenting that I thought the art was fantastic and it looked like a really fun book. And there he was, standing right between the banners for his Panda Dog Press and Andy Schmidt's Comics Experience. 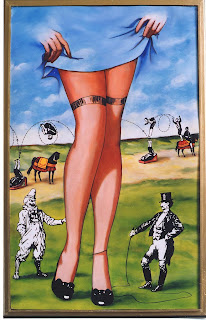 Rob told me that just a couple of years ago he would not have thought it possible that he would be creating a comic book, let alone multiple comics, and that his participation in Comics Experience played a very big part in his accomplishments.

Rob suggested I go talk to Robert Aktins, the Comics Experience Art Instructor, who was just a few tables away. I was impressed with their honesty, sincerity, and the fact that they were really involved, practicing what they preached, and I figured I might as well give it a try. I'm glad I did!

I joined the Comics Experience Creators Workshop on June 9, 2011. For me, the true strength of it is in the critique forums and the well thought out guidelines for getting and giving critiques. That interaction from other members has really been enlightening. 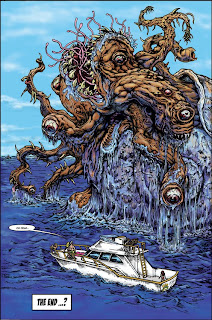 Very recently, I decided to participate in one of the monthly "Challenge" assignment in which all workshop members are encouraged to create a story based on a given theme. The theme for August was "Birthdays" and, as is typical with me, my first thought was to do an unusual and horrific take on what is supposed to be a happy occasion.

I went with my first idea: what if some disgruntled child made a particularly deadly birthday wish and it came true? It was an interesting enough premise, but then, thanks to my continued interest in the horror genre, another stylistic set-up came to mind.

I watched a very disturbing French film early in the summer called Irreversible. It had a backward narrative and essentially began with a really horrible murder and then went back in time to show the horrible, almost unwatchable, events that provoked the lead characters to commit such brutal mayhem.

The backwards timeline has been attempted in films a few times. Momento comes to mind from quite a few years back. In that film, it was used in conjunction with a mystery narrative, which complicated things almost to the point of total confusion (it worked better in Eternal Sunshine of the Spotless Mind, and really well in an episode of Star Trek: Voyager that I saw a long time ago). I decided to give it a try with a simple narrative: a horrible event and the moments that led up to it. 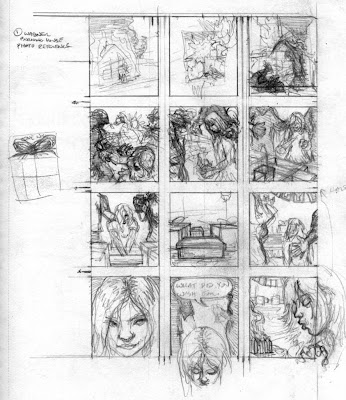 In doing my thumbnails and planning out the page, I started out thinking about the recent Chris Bachalo issues of the Avengers (#13 & #15). I am a fan of his drawing style, but in Issue 13 there were tons of these 12 or 16 panel pages -- little boxes and lots of "talking heads."

I remembered reading somewhere that he often inspired great criticism for his little box pages early in his career -- and so, next thing I know, I'm thumbnailing my story out in 12 boxes for 1 page -- just to see what happens.

Then I realized that I needed room across the top for a title...and getting rid of one row would make a box that I could make into a gift-wrapped present, which went with the birthday theme really nicely.

I think the general ideas of the story came through in the first "finished" version that I posted for critique. One gets that things are going backwards, and we see the damage caused by this angry little girl. But there were also some problems with the first version of the story that I was just too close to see. The comments and suggestions from the other workshop members really allowed me to step back and see the story with new eyes, and then to make some small but significant changes that I know really improved the narrative. And making those changes made a world of difference in the final version: 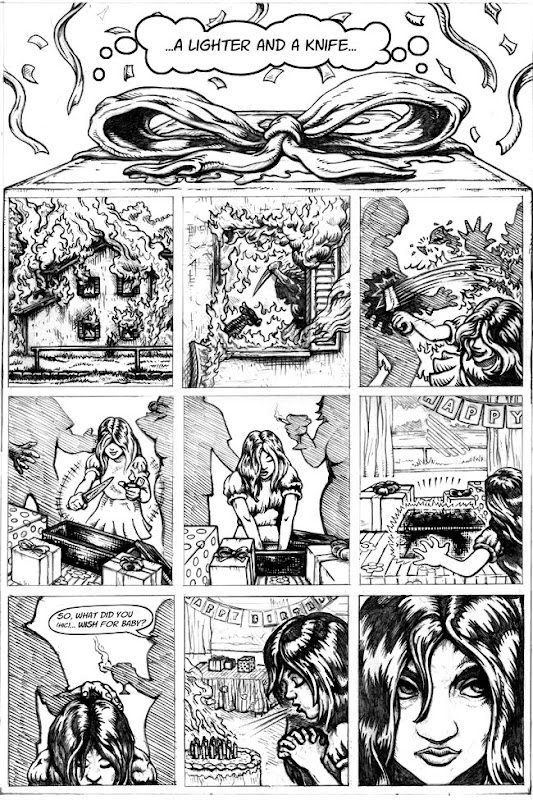 Last weekend, I took my portfolio to Dragon*Con to show it around, and I have to admit, I felt pretty good about showing my most recent page to people. I got some really great comments on it and I know that the success of my storytelling has been greatly enhanced from participation on the Comics Experience Creators Workshop.

I've gone ahead and enrolled in the Introduction to Comic Book Art being taught by Robert Aktins which looks like it will be even more helpful, and right now, I literally have to get back to the drawing board.