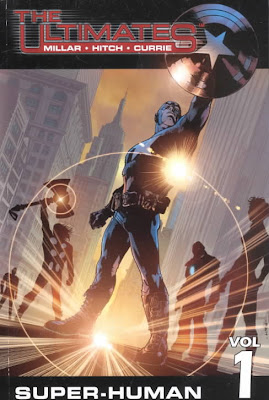 Gearing up for our first official COMICS EXPERIENCE BOOK CLUB meeting on January 8th (see below for how to join in the fun!), I’ve just finished re-reading THE ULTIMATES volume 1. Man, I forgot how bizarre and great those first six issues really are.

One thing that struck me as very interesting is how it really doesn’t follow the typical three-act structure the way I remember it. Yes, there’s a big climactic battle in issue #5, but issue #6 focuses a bit on the denouement of the story but really is a character piece that leads right into issue #7 more than wraps up the first arc of THE ULTIMATES.

Here is a story about the coming together of the world’s biggest and most powerful super-hero team ever assembled and the first volume ends with the Ultimates themselves as the villains. Now, that’s a bit surprising for something built to be the corner stone of Marvel’s then still infant Ultimate Line of comic books.

Millar is writing some of his finest work. While the pop culture references are already dating the book, the overall effect of what Millar does with his characters is astounding. I find that I don’t care about the plot—that is, I don’t really care who the threat is or if the world gets dominated. Millar and Hitch (let’s not forget Hitch’s artwork) manage to pull together a story that feels like a blockbuster summer movie but is actually a carefully thought out character piece.

That said, there are things that don’t hold water as well as I remembered or feel more forced, but that’s the rarity. Overall, a great book and I’m thrilled to be leading the discussion of it on Tuesday. January 8th. Plenty to talk about and analyze. As a sample, if you’re interested, here are the questions and topics I’m giving out to the book club members to think about as they read THE ULTIMATES volume 1 and that we’ll be discussing in the group.

If you’re interested in joining us for the discussion of THE ULTIMATES volume 1 – Super-Human, check out the link here to the BOOK CLUB page of the Comics Experience website. We’d love to have you join us!