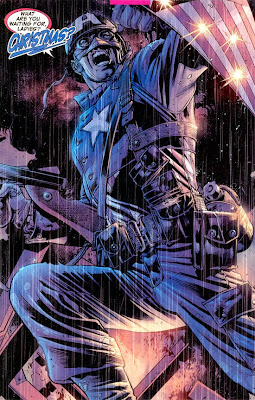 Tonight’s book club was the first one and it was awesome! We reviewed THE ULTIMATES vol 1 – Super-Human. But what was really great about it was the enthusiasm of the people in the group. I set out with several topics and questions to think about as they read the book and asked if anyone would like to present on any of the topics and got several volunteers (no one has to present if he or she doesn’t want to).

And those really made the club something special. Yes, I work in the industry (and in this case, had some—not that much, but some—inside knowledge about the book. But I’m still only one person with one point of view.

Rob Anderson presented a section on Mark Millar’s career. He is the writer of ULTIMATES as well as several other high-profile books including WANTED and KICK ASS. And Rob’s presentation was just fantastic. He did a great power point to illustrate some of the highlights of Millar’s career. See below. 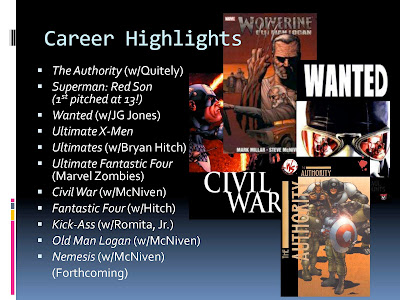 Then Joe Sergi presented on the creation of Marvel’s Ultimate line of comics and compared the formation of The Ultimates to the original formation of the Avengers, the super-hero team upon which The Ultimates are based. Again, extremely throurogh, but Joe took it in a really fun and funny direction. He even got some good New Universe gags in there!

And Fred Kim gave an in-de 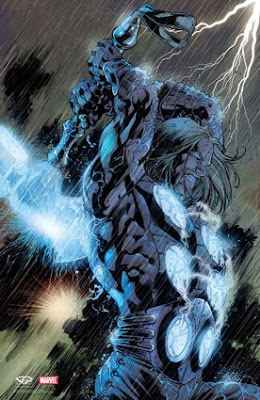 pth presentation on Captain America, explaining why he was the protagonist of this first volume of the Ultimates. It was great to see all of these participants bring something new and refreshing to the table. Every presentation brought up points I hadn’t thought of and I found my opinion of the work overall changing as they spoke.

And then we moved onto other topics. Talking about the treatment of women in the book. And as a group we were divided—some thinking the book was insulting to women and others saying that wasn’t the case. Both sides of the argument were articulated well and with respect to differing viewpoints.

I came out of this thing super-charged to get back into my own writing and reading of other great comics and graphic novels!

I hope more people will join us in the future as this one really exceeded my expectations! Join us.

Posted by Comics Experience with Andy Schmidt at 12:43 AM