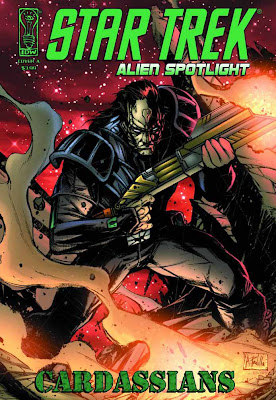 Hitting shelves in comic shops everywhere (except the west coast—they have to wait until next week) tomorrow is STAR TREK: ALIEN SPOTLIGHT – CARDASSIANS written by… well, by me—and my brother Arne.

I have to say, probably because Arne has been such a great influence as a storyteller, I’m extremely proud of this comic book. It’s a one-shot that, I’ll admit, is pretty set in continuity from the TV show STAR TREK: DEEP SPACE NINE.

And working with Arn was great. He’s a real die hard STAR TREK fan and was able to add all these great nuances to the characters that I just would have missed left on my own.

Arne is a storyteller in his own right. He lives on the other side of the country from me as a video game animator. But he’s always been involved and story and has been one of my go-to guys as a sounding board for different ideas for years (along with our other brother Craig).

Pulling Arn in to co-write this was a great move and he really deserves a lot of credit. The main character in the book we actually created together nearly 10 years ago when Arne ran a STAR TREK roll playing game that I was a member of. We created the character and I liked him so much, I knew I’d want to use him if I ever got the chance.

Fortunately, the good people at CBS/Paramount also liked him. So, that’s how the issue came about. And working with Agustin on the art was amazing! He’s one of my favorite rising talents!

So, if you’re reading this, go check it out tomorrow! And let me know what you think!

Posted by Comics Experience with Andy Schmidt at 10:10 PM