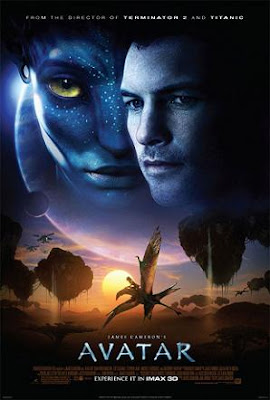 So here’s the deal with AVATAR—James Cameron won the Academy Award for best director and best picture last time he came out with a wide release in 1997 with TITANIC. He’s remembered by many a sci fi fan and comic book fans for creating TERMINATOR and TERMINATOR 2: JUDGMENT DAY. He wrote and directed ALIENS and TRUE LIES along with several other movies. He’s taken ten years to complete AVATAR and it’s easy to see why when you see the film.

What he manages to accomplish in AVATAR is at times absolutely breath-taking. There are certain shots in the film that will probably stay with me for years. But they’re not the ones you’d expect. They’re not the big moments or set-pieces of the film. They’re in between the big and loud stuff.

The story analysis is easy. It’s a simple story—one of the simplest and most classic stories you can imagine. Boy goes on a journey, finds a different people, befriends them, knows his old people are going to harm his new friends, and so he turns against his old friends to join the new people in a fight against his own kind. Yeah, that’s it. You get it in the first ten minutes and it doesn’t throw you any curve balls.

The characters are the ones you’d expect, especially if you’re a fan of Cameron’s earlier work, borrowing most heavily from ALIENS. It almost feels like a remake of that film—almost. While none of them are likely to stick with you, they all play their roles well. One character has a decision moment about half way through the film that is not set up well, but honestly, I don’t think anyone in the audience I saw it with cares.

There are a few plot holes that are easy to spot if you bother turning that much of your brain on, but they are just glossed over and are not so big that I couldn’t just fill in some blanks. I’m pretty sure there is a deleted scene in the back half of the movie where a couple of quick “I”s are dotted and “t”s are crossed. Probably taken out to keep the momentum of the film going. All in all, these aren’t a problem. 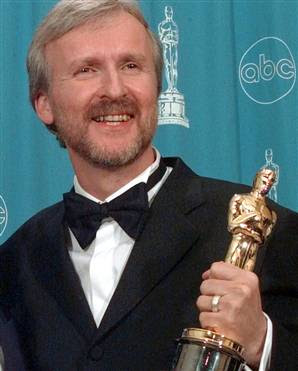 Now let’s talk about what really works and why I think Cameron is going to be destined to go down in Hollywood history as a great craftsman but not as a visionary director like Hitchcock or even Speilberg. The thing is, Cameron is almost too much of a craftsman. Every scene in the film sets up its counter-part later in the movie. They are all telegraphed easily. That doesn’t stop them from being rewarding for the same reason. Cameron sets them up so well, that when the payoff comes, you’re wanting it and he’s able to deliver with an exciting execution.

And the visuals in the movie are nothing short of awesome. Yes, there are big visual reveals and twists, but it’s the quieter scenes that really surprise the viewer because that’s where we’re expecting to just drudge through to get to the next telegraphed and often cliché moment. There are some genuine treats in these scenes.

What the film is lacking is a heart or even a real opinion about, well, anything. The bad guys are capitalist scumbags who are willing to commit genocide on a peace-loving people to make a buck. And almost no one seems to think this is a bad idea. They’re just heartless cardboard cutouts. Not a one of them has a moment of doubt any further than what is needed to carry the plot further, which means not much and when it does happen, that’s the character moment I referred to earlier that doesn’t make any sense. But ultimately, these are your bad guys? Really. How come everyone in the audience knows to hate them but no one in the movie does? They don’t even bother to hide what they’re doing.

And for as long and intricate as the movie is and the setting provides, AVATAR is rife with missed opportunities to explore real questions or make a statement of any value. And I think that’s going to go a long way for it to make an absolute killing at the box office. But they talk about a “deity” but never god. They talk about “hope” but never “faith”, and they ask a lot of questions about what it might mean to be able to communicate in different ways, but never explore these ideas beyond the point where they give us a cool action beat.

The main creatures are able to bond physically and mentally with other creatures on the planet. To be able to communicate in a more intimate way than a mother does with the unborn child. That’s a huge thing. And when a human is able to do it, you’d wonder how that would impact the human’s realm of experience. Wouldn’t making love pale in comparison when the level of intimacy is compared? But that’s never brought up. That’s only one example of a missed opportunity. There are many. 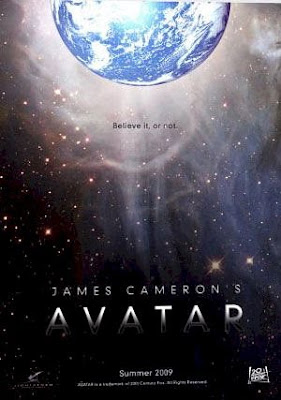 What Cameron does give is an action movie to the core. He gets you in fast, gets you to care just enough about the people to care about the situation and then he starts blowing everything up and it’s fun. I hate to come off sounding like I didn’t like it. I did. I don’t sit through most three hour movies, but Cameron has the disadvantage of being, well, James Cameron. While not a huge fan of TITANIC, I think he managed to almost reinvent the science fiction and action genres simultaneously with the one-two-punch of ALIENS and TERMINATOR. And then he delivered arguable the best big-budget sequel of all time with TERMINATOR 2: JUDGMENT DAY. And that’s what he is compared to now.

AVATAR is thrilling and visually impressive. The leaps made in special effects alone will make it a note-worthy film for years to come. But the characters are one-dimensional, the plot and structure very predictable, and it doesn’t explore any new territory. The characters in this film are poor-man versions of his more colorful characters in ALIENS. The big one-liners don’t play as well as they do in any of his other films. There is nothing quotable in the movie, and you can tell that there are supposed to be some big lines in there.

The acting is flat for the most part. Sam Worthington carries the role, but doesn’t add much more to it. The aliens are hard to critique but I did stop thinking about how cool they were and how they managed to come across like actual characters—that’s a huge achievement that goes to Cameron, the actors, and the effects crew. Sigourney Weaver gives the best performance of the bunch and is a lot of fun to have in the film.

All in all, impressive and expensive, but not destined to be Cameron’s greatest film. I’d say not even destined to be his greatest contribution to special effects. That said, I had a lot of fun with the movie once, ten minutes in, I realized that AVATAR isn’t meant to redefine a genre. It isn’t attempting to tell a complicated story. It’s not attempting to be a character driven drama. It’s not attempting to say anything about anything. It only wants to entertain and stun visually. And it succeeds extraordinarily well on those terms.

Yeah, go see it. And I’d go see it on IMAX 3D if you can. Because much of what is impressive about the film will be diminished on your screen at home. This is one for the theaters.

Posted by Comics Experience with Andy Schmidt at 2:50 AM