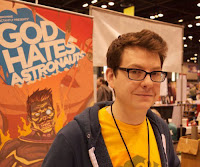 Comics artist and writer Ryan Browne joined the Comics Experience Creators Workshop recently, and discussed his work on Blast Furnace, a wacky, action-filled web-comic which was recently released in print.

During the session, Browne shared some lessons from his experience working on Blast Furnace. 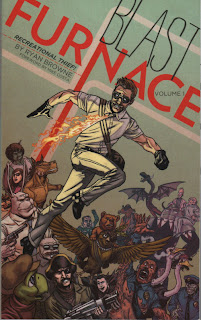 Browne said that while writing Blast Furnace, he tried to have at least one joke on every page, and to make every page a satisfying reading experience.

If a reader is only looking at a few pages a week, then "a super-decompressed story where two people are having a conversation that lasts six pages is not really gonna fly," Browne said. "It works if you're reading it when it's all done, but if you're reading it week to week, it doesn't. So I need a beginning, middle and end to every page."

As a result, Browne said, Blast Furnace's scenes "last about two pages at the most."

Embrace the nature of your story

Rather than fighting against this unconventional structure, Browne said he embraced it.

"I knew it was going to be unfocused to begin with, so I decided to just celebrate how unfocused it was, and go for it," Browne said. "I kind of make a joke out of how unfocused it was, so you would read it and go, 'I don't even know where I am anymore.' No storyline is getting wrapped up, every single story is just becoming more and more unraveled and expanded." 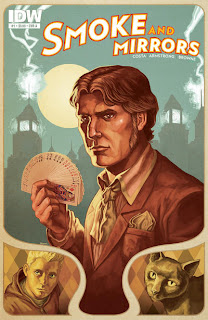 When you're stuck, keep going

I think I have ideas, and when I realize they don't totally work, I just find a different way to use them. I didn't really veto any ideas or any bad jokes, because I knew that I had so many pages.

"Quite frequently I didn't know where I was going," Browne said. "I got stuck all the time, and my cure for getting stuck was to just start doing it."

"If I get stuck in a scene I'll just kill it," Browne said. "I'll go into a flashback, or someone will get hit from something off-screen, and we're on to the next thing."

Other topics discussed by Browne included:

* How he got his start in comics
* His creative process
* Designing Blast Furnace's characters on the page
* The Coen Brothers film The Hudsucker Proxy, and how it influenced Blast Furnace's storytelling
* Any ideas you had that were TOO outlandish for you?
* Using up ideas/throw-away jokes
* The importance of making your own comics, and making them good
* Promotion, and generating revenue from creator-owned work

Those interested in seeing more of Browne's work can check out his other web-comic, God Hates Astronauts. Browne also illustrated the IDW Publishing mini-Series Smoke and Mirrors, written by Mike Costa and Jon Armstrong. He is currently illustrating issue #10 of the Image Comics ongoing The Manhattan Projects, written by Jonathan Hickman and set for release in January.

Posted by RobAnderson at 2:00 AM