Pak and Arbona on Red Skull and making villains accessible 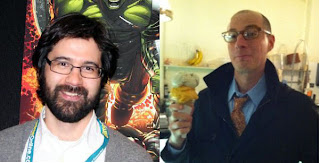 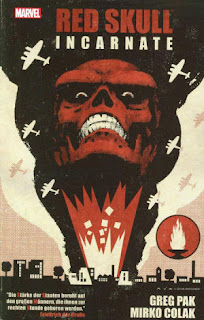 During the session, Pak and Arbona discussed the challenges of creating a story about a such an evil character. The two had previously worked together on Magneto Testament, which similarly traced the WWII origins of the X-Men mainstay. But in that book, Pak noted, Magneto was a hero during the time and place the story was set.

By contrast, Pak said, Johann Schmidt is a sociopath, and the most evil person in the Marvel Universe, serving as the Marvel equivalent of Adolf Hitler.

Arbona described the character as a monster, whose actions are inexcusable, and who lies largely beyond the realm of sympathy.

The challenge, Arbona said, was "how do we make this character accessible to readers at the very beginning, and then keep readers with him throughout the entire story, as he gets worse and worse?" 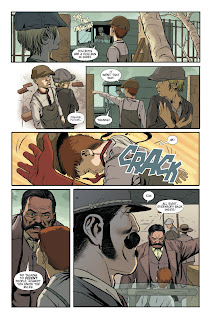 One of the keys, both men said, was to make the character accessible, even if he wasn’t sympathetic.

"Villains should be three-dimensional characters, to the extent that you can relate to them; that they have their own wishes and their own agenda," Arbona said. "You should not sympathize, but you should at least understand where he’s coming from, at least see him as a thinking, feeling human being, making choices."

As part of this, Pak said, he tried to avoid definitely stating that Schmidt was evil from birth, while also not denying the possibility.

"We wanted to understand where he came from, but not excuse him," Pak said. "There are plenty of people who grew up in the same circumstances who didn’t become what he became. At the same time, we wanted to show those circumstances.

"Under other circumstances, in a different world, he wouldn’t have necessarily become who he became. If nobody had ever beat him down, he might never have beat anyone else down."

Other topics discussed during the session included:


* How they came into comics, and how Red Skull Incarnate came about.
* Research for the book, and for writing projects in general
* Working with Marvel on such dark and complex material
* The process of creating such striking covers for the book (created by artist David Aja)
* The use of color in the book (from colorist Matt Wilson), and using color to advance the storytelling and re-enforce the emotional journey of the book
* The choice to never show the Red Skull as he appears in current continuity
* Pak’s efforts to market his work, including work-for-hire.


Greg Pak is a filmmaker and comic book writer best known for directing the award-winning feature film Robot Stories, writing the epic Planet Hulk and World War Hulk comic book storylines, and co-writing (with Fred Van Lente) the fan favorite Incredible Hercules series for Marvel Comics. He was named one of 25 Filmmakers to Watch by Filmmaker Magazine, described as "a talent with a future" by the New York Times, and named "Breakout Talent" of the year by Wizard Magazine.

--Posted by Paul Allor
Posted by RobAnderson at 10:37 AM