As Robert said on his blog:

"I started drawing GI Joe for IDW in 2008...I started a run on the book that I hardly expected to be so continually involved with at the time. Four years later I've done over 50 covers for the property." 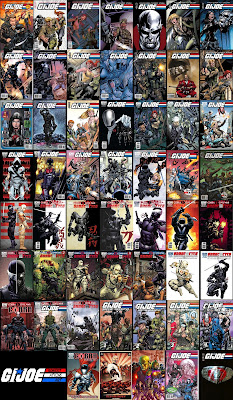 Robert has also done work for Marvel, NBC, Dark Horse and DC comics while he's been working on GI JOE, in addition to launching his Kickstarter project for Elders of the Runestone.

On top of all that, Robert also teaches our Comics Experience art classes!

If you'd like to improve your craft and learn about breaking into the comics industry as an artist, Robert's next Introduction to Comic Book Art course begins on August 30, 2012 and there's still time to sign up right here!

But, in the meantime, check out this great graphic of Robert's spectacular cover run from his Robert Atkins Art Blog!

(Click the picture at right for a larger view)