And one of the key artists on the project, Ken Frederick, is not only Janine's husband, but a CE alum and Workshop member as well!

Quandary is a digital comic of a story that takes place twenty years in the future. 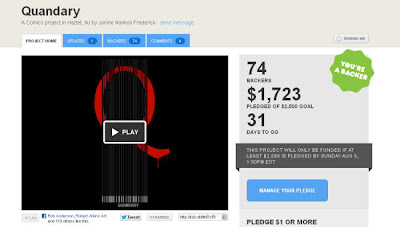 In this future, everyone lives in a "police state" and the U.S. has been at war in the Middle East for thirty years. Protesters in the "We the People" movement are regarded as terrorists, hunted down and executed for challenging the system. Then, one event -- an accidental death -- inadvertently sets in motion the wheels of a revolution, and tyranny begins eroding from within. 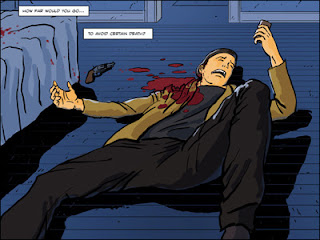 As Janine puts it herself, "If Quandary were a mixed drink, the recipe would be: 2 parts George Orwell's 1984, 2 parts Life as We Know It, and 1 part Occupy movement."

With 31 days to go (as of this writing), the project has reached nearly 70% of its funding goal.

As incentives, supporters can choose PDFs of the comic, special edition prints and t-shirts, sketches -- or even receive a special price on a 3-month membership in the Creators Workshop! 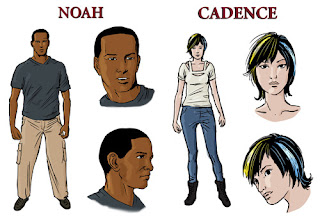 More rewards are being unlocked when certain support levels are reached. For example, just today it was announced that every person who contributes will also receive a PDF of the independently produced one-shot zombie apocalypse-themed comic called The Forgotten Dead, penciled and inked by Ken Frederick and written by CE alum Chris Murphy!

If you'd like to hear more about the Kickstarter, you can also listen in on Janine's recent appearances on Kevin Smith's SmodCo's Smorning Show podcast with Ming Chen and Mike Zapcic (of AMC's Comic Book Men)! Or her appearance the same day on Mike and Ming's I Sell Comics podcast. Just click the links or download them on iTunes to check out the June 21, 2012 episodes for more info!

Good luck to Janine on her exciting project!

If you'd like to support her Kickstarter campaign, check out more info here: www.readquandary.com.