As reported by The Beat, the story "The Time of Reflection," has won the 2012 MCM Expo Award For New Visionaries! (You may have heard this referred to as "The Huntsman's Challenge" or the "Eagle Awards New Talent Competition" as well.)

Writer Alex Wilson (a Comics Experience alum and Creators Workshop member) and artist Silvio dB had their story selected as one of two finalists by judges Steve White, Tony Lee, and Mark Buckingham, and then were selected as the overall winner via a vote. 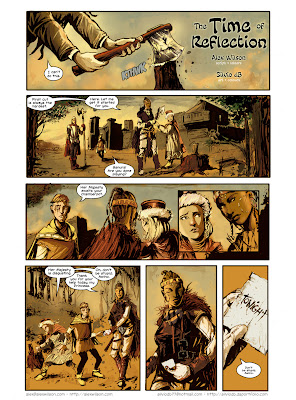 You can read the full winning story on Alex's website right here:

The Time of Reflection (full story)

The winning story was included in the MCM London Comic Con show program, printed in conjunction with Snow White And The Huntsman from Universal Pictures.

The competition required a dark fantasy story (complete with five pages of color art!) with only a month from announcement to deadline. Two other Creators Workshop members, Paul Allor and Amy Chu, also were named to the judges' shortlist!

Currently, Alex is shopping both a humor novelette and a full color crime graphic novel to publishers and agents. He runs the audiobook project/podcast Telltale Weekly and publishes the minicomic/zine Inconsequential Art. He is a Clarion grad, WotF finalist (prose), and, now, also the writer of an Eagle Award winning comic!

Congratulations to Alex and Silvio!