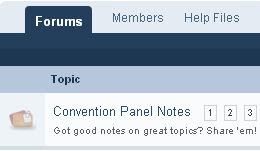 If you're like me, you learn a lot from comic convention panels, especially those on breaking in, craft, and process. But no one person can get to every panel or every convention.

And while many panels get recorded these days, not all of them do, and sometimes you just want to review the highlights rather than listening again from beginning to end.

Well, one of the many features of the Comics Experience Creators Workshop is a "Convention Panel Notes" thread where members share their notes from sessions related to making comics. In fact, going beyond conventions, we also have notes from various physical seminars and workshops from the past.

Want some examples? How about John Layman's Pitching Workshop, held in New York City in 2010? Or the Kickstarter panel from NYCC 2011?

We have notes from a Trickster writing seminar, held during SDCC 2011. And notes from panels on how to get news coverage for your comic from SDCC 2011 itself.

Plus, Breaking In panels, including the excellent one held by Scott Allie (Dark Horse) and Matt Gagnon (BOOM!) at this year's New York Comic-Con.

This is just one of the examples of a single thread from the Creators Workshop focused on breaking in and/or making comics.

If you want to make comics, write or draw comics, or improve as a comics creator, you'll find like-minded friends and colleagues in our online workshop and courses. We hope to see you there!