I said a while ago that I'd try to do some reviews of comics and graphic novels I find interesting and are a little off the beaten path. Well, this is definitely one--it's called ROAD and it is written and illustrated by Eddie Sharam and co-written by Jamie Woodhead. 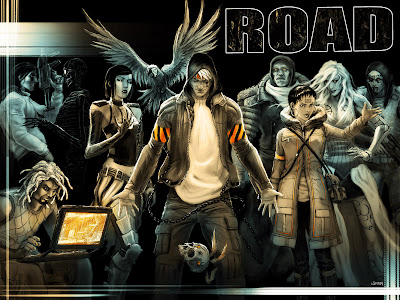 The edition of this graphic novel that I have seems to have been self-published. It was given to me at the IDW Publishing office after someone else had read it. It had been given to him, and so neither one of us knows where it was actually originally picked up. The special thanks include DC Comics, and given that it is a horizontal comic, my best guess is that this came together through DC's Zuda, online comics program. Anyway, that's not all that important really, it just all seemed to kind of fit with the book itself in an odd way.

ROAD is set in what seems like Earth's future. There is a single ROAD that seems to have no point of origin and no termination point either. In this kind of post-apocalyptic future, there are pilgrims who travel the road looking for answers of a spiritual nature. There are towns and cities along the road, but it just never ends. One can spend his whole life traveling down the road and never come any closer to the end, it seems.

Sharam and Woodhead's story follows Felix, one of these pilgrims, who seems to go a bit rogue. This book has two big things going for it. The first is that the basic concept, to me at least, is intriguing. And the book goes beyond the initial concept and begins to flesh out a whole world here that is interesting, if at times a bit confusing. There are a lot of characters--all of whom have different agendas and allegiances. There's a lot going on, and the world builds quickly. But it's not usually confusing. The authors keep us tied to Felix for the most part. We're learning why he is so important and it's intriguing. It's a story well told. 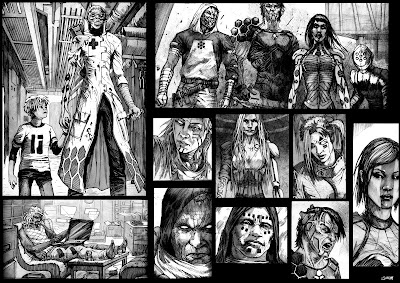 The second thing ROAD has going for it is Sharam's art. It's a black and white book, and his art is really cool. The storytelling is at times choppy but by no means a problem for someone who has read his or her fair share of comics. But it's his set design and character designs that really shine. I know who his characters are right when I look at them. That's not to say they're only surface deep, but Sharam's designs give me distinctive identities and looks to latch onto right away. It goes a long way to preventing the book from becoming confusing--because the characters are all so visually distinct.

I was disappointed to get to the end to realize that there is no second volume yet published. I hope that Sharam and Woodhead can find another publisher to continue this story. I'd recommend anyone interested in making comics take a look at a book like this. It's an impressive feet for two guys to pull a work like this together, and there's a lot to learn in terms of visual design here for any creator--writer or artist.

So check it out!

Andy
Posted by Comics Experience with Andy Schmidt at 8:40 PM