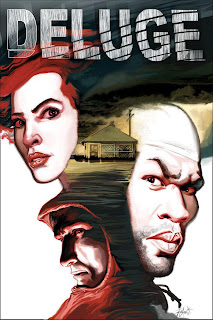 On July 29, 2012, MoonShot Digital Comics announced that a project by two Comics Experience alums -- writer J.D. Oliva and artist Richard P. Clark -- would be amongst the first to launch its new digital comics product line.

The project, titled Deluge, is a crime thriller set in New Orleans in the immediate aftermath of Hurricane Katrina.

In the story, an undercover FBI agent tries to outrun a group of rogue cops who have taken to the flooded streets, picking off stranded criminals.

In an interview with the website Pipedream Comics, J.D. explained the origins of the idea:

I was shooting a short film in New Orleans in the summer of 2008 and while at a bar one night the locals started telling Hurricane Katrina stories. One of them was about a group of cops who decided to pick off criminals stranded on their rooftops.

That story always stuck with me, but it took me a few years to figure out how to make it work beyond just the concept. Then in the summer of 2010 while in Andy Schmidt’s Comics Experience Advanced Online Writing course, I had to come up with a miniseries pitch and that was the first thing that popped in my head...

Deluge was the subject of a successful Kickstarter project which raised more than $6,000 at the end of 2011.

J.D. is a writer and documentary filmmaker from South Elgin, Illinois. He's directed several short documentaries and three feature length documentaries. J.D. wrote a Comics Experience guest blog on Deluge back in late 2011 which you can read right here.

Richard is an artist based in upstate New York. His illustration career began in 1993 while still an undergraduate at The Columbus College of Art and Design, and since then, he has worked for a variety of clients in the editorial, book, advertising, institutional and comic industries, including The Wall Street Journal, Playboy, HBO, Sports Illustrated, Dark Horse Comics, DC Comics, Marvel Comics and many more.

In yet another Comics Experience connection, the book is also edited by CE staff member and alum, Paul Allor. 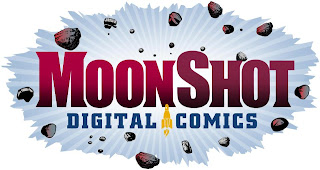 According to the publisher's website, MoonShot Digital Comics is a creator-owned publisher who "seeks to discover, develop, and publish new talent" with a focus on digital publishing.

MoonShot is the brainchild of George Lentino, a former Nickelodeon executive. You can read an interview with George in a SciFi Pulse interview right here.

Congrats to J.D. and Rich on Deluge!