In October of 2009, if you had told me I'd be selling -- and signing -- my own comic book at Heroes Con nine months later, I would have thought you were crazy. But that's exactly what I was doing a week ago.

Sure, I'd had an idea for a comic book for ten years -- ever since the year 2000, when a "performance artist" and a French geneticist teamed up to create a rabbit/jellyfish trangenic animal that glowed in the dark. 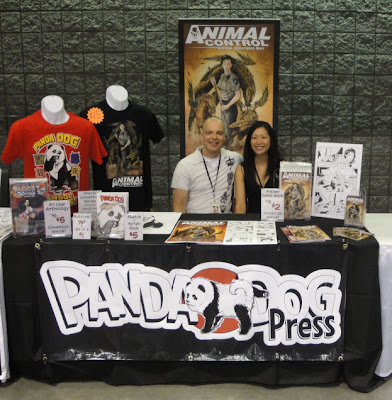 As they say, "you can't make this stuff up."

With my rabid love of comics and animals, from that point on, I had this story stuck in my head about Animal Control Officers in the near future. And I made multiple attempts to successfully put it to paper over the years, but was never satisfied with the result. I needed something more.

When I heard about Andy Schmidt's comic book writing class, I felt like it was just what I needed. But I had a life (and a day job) in Virginia, and the classes were Wednesday nights in New York City.

I was so desperate to take the class that I seriously contemplated six consecutive weeks of mid-week vacation days, frequent flyer mile plane flights, and bus trips, but it just wasn't financially realistic. I was stuck.

(As a side note, I did not consider Nick Spencer's approach of quitting my job and moving to New York to take the class. He wins the crazy contest for that plan. And I respect that. Especially when you consider his results: multiple titles with Shadowline/Image, and a new movie deal with Paramount for Existence 2.0. Well played, Nick. May we all be so "crazy.") 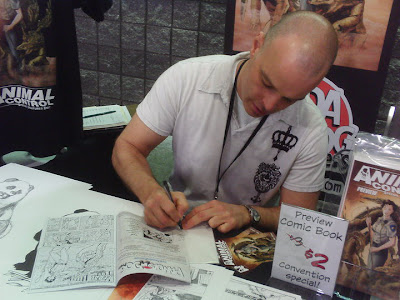 Lucky for me, the heavens parted -- to the soundtrack of Beethoven's Ode to Joy (that part may have been in my head) -- and Andy announced the first *online* Intro to Comic Book Writing class in October of 2009. Can you guess how fast I signed up?

I knew I would learn a ton about scripting, pacing, story structure, and other elements of comic book writing.

What I hadn't anticipated was how much I'd learn about the business of comics like: 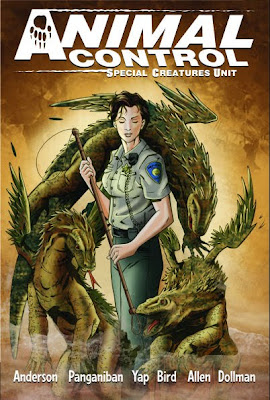 The momentum from the class led my classmates and me to publish the Tales from the Comics Experience Anthology. And a few months later, I self-published the Animal Control: Special Creatures Unit Preview, which debuted at Heroes Con about a week ago.

Wow. Ten years of chasing my tail versus nine months of focused activity. Who would have thought one class could make such a difference? I don't think I need to explain why I signed up for the Advanced Writing class recently. Or why the class sold out in about three days.

All of which led to me sitting there at the Panda Dog Press table, signing copies of my own comic book. It's only a little black and white 20-page preview, and I'm still an "unknown," but at least I can say I'm an unknown comic book *writer*, and not just someone who thought about it and never followed through.

What's it like doing your first convention with a table? Exciting. And fun. And a little scary. (Don't expect to sleep much the night before.) And totally worth it. 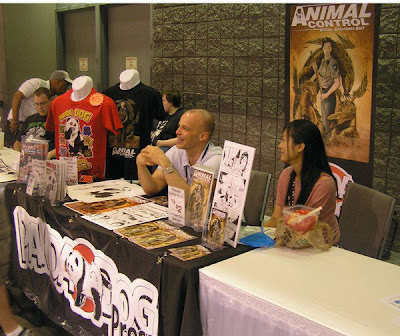 Showing my first comic book to people, seeing them check it out, having people react positively to it, and even buy it (!) -- what a rush!

I've apparently been bitten by the radioactive spider that infects you with the compulsion to create comics. So, if you'll be at the Baltimore Comic-Con at the end of August -- Panda Dog Press's next stop -- please stop by my table and say "hi." I'll be the one with the radioactive glow (or should I say "transgenic" glow?) -- and a smile on my face that says "I make comics."

You can check out Rob's full Heroes Con report here.
Posted by Comics Experience with Andy Schmidt at 12:32 AM