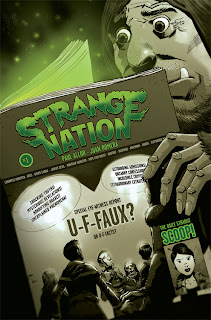 But before that, an advance copy of issue #1 will be available from Paul at Emerald City Comic Con and Fabletown and Beyond.

According to Action Lab, Strange Nation is a madcap tale of tabloid myths. The story stars Norma Park, a reporter who discovers a bizarre conspiracy, tying together aliens, Sasquatch and mad scientists.

The book is already receiving great advance reviews, including this one from Multiversity Comics! You can also read an interview with Paul and see more pages over on CBR's Robot 6. 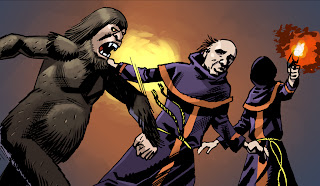 Paul is a graduate of the Comics Experience writing, lettering and editing classes, and is a longtime member of the Creators Workshop.

His previous works include Clockwork, Vol. 1, a collection of five-page comics, many of them workshopped through Comics Experience; Orc Girl, a one-shot with artist Thomas Boatwright; and Teenage Mutant Ninja Turtles: Fugitoid, a one-shot for IDW Publishing.

Congrats to Paul and Juan on this upcoming mini-series!