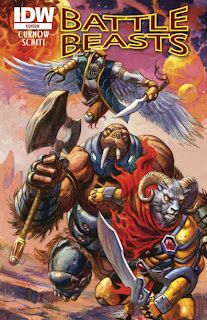 Writer Bobby Curnow had a new book debuting at C2E2 this year: the Battle Beasts ashcan published by IDW!

Battle Beasts is being produced by IDW in conjunction with Diamond Select Toys. In addition to the aschan, DST was also offering an exclusive promo Minimate of one of the book’s lead characters at C2E2. The story will continue in Battle Beasts #1 in July 2012, premiering at San Diego Comic-Con (July 11-15). 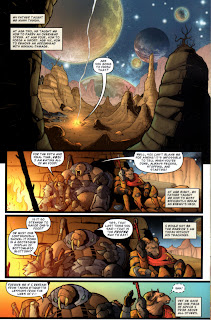 The ashcan focuses on a group of renegade Beasts who return to Earth to protect the ultimate weapon (and the human who activated it) from an armada of their violent brethren. It reprints the first eight pages of issue #1 in full color.

Bobby recently said, "Getting the chance to help create the new Battle Beasts in comic form has been a fantastic and supremely fun experience...IDW has a lot of experience finding riveting stories in toy-based licenses, and I hope Battle Beasts is no exception."