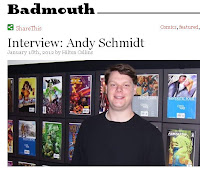 Hey comic book fans, here’s some trivia for you.

What do Nick Spencer, writer of Morning Glories, and Shaun Manning, a semi-finalist in Stan Lee’s The Seekers writing contest from MTV have in common?

They’re both alums of Comics Experience, an online school for people who want to break into the comics industry as writers, artists and editors...

Writer Hilton Collins had an in-depth conversation with Andy that begins with a run-down of Andy's career and then covers everything from how Comics Experience got started to his writing work on the creator-owned 5 Days to Die published by IDW!

Check out the full interview on Badmouth

Posted by RobAnderson at 6:37 PM