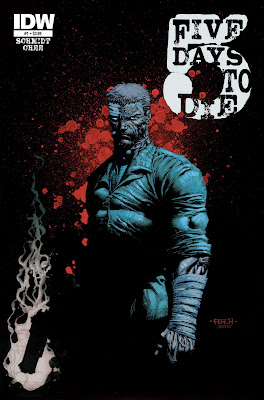 Here we are, the week of 5 DAYS TO DIE #1. The book is weekly, so don't miss this one, folks! I've poured my heart and soul into it, so I sure hope it doesn't suck!

The first review I've seen for it is here. And it got a 5 out of 5! So that's pretty sweet.

I don't really know what to say, but I thought this might be an interesting time to talk about what this feels like. I've been working in comics as an editor since early 2002, and as a writer since 2007. 5 DAYS TO DIE is my first creator-owned comic.

And unlike anything I've worked on before, this is terrifying. For one thing, it just feels like it's you, not a piece of work, but YOU that people are reading. So when it gets read, they are reading YOU. There's no big company to hide behind. This is what I did. This is what Chee, the amazing artist and co-creator did with ME. So if people don't like it, it's going to feel like they don't like ME--me as a member of the human race or something.

Also, I've conned a publisher (IDW Publishing) into thinking this will do well for them. And I work for them. I've pitched two other comics to them before and they love me so much, they said no to both (which, to be honest, is something I really respect and am glad they wouldn't greenlight something just because I work there). But if 5 DAYS TO DIE didn't perform or is poorly received, I don't have Hasbro to hind behind. Again, this is me, so if it goes poorly, I have to answer to them--personally. I can just feel Darth Vader's force crushing my windpipe now (not that anyone at IDW is like Darth Vader, but occasionally there is mysterious heavy breathing in the office, which totally creeps me out).

But I think ultimately, I'm terrified because it's not just that it feels like it's me on the line, to some extent it is. I wrote earlier about my relationship with my son Cale and how this comic is in some way a part of that. A part of my guilt over some of those feelings during his first year with us. And I've even put some of that in issue #1 itself. And the absolute most terrifying thought to me is that 5 DAYS TO DIE means something personal to me. It's about my son and me and how we are together. And if it comes off hammy, or over-the-top, or insincere, or overly sentimental and causing groans from the readership, then it is my expression of something very personal that people are laughing at.

I think it's probably like that dream I've always heard about (but never had) where someone is being laughed at by all their classmates only to realize in the dream that the person is standing there naked. I think this is what that would feel like, only I fear that it would just be a mighty cold day, to boot.

So, that all being said, there it is. There I am, all on the line in 22 pages in your comic shop this Wednesday. And on Wednesday night, I'll announce something pretty cool here on this blog that has to do with 5 DAYS TO DIE and a special offer.

Hope you all pick up the book on Wednesday and let me know what you think. As horrified as I am at hearing or reading your thoughts, I can't resist wanting to know anyway!

Andy
Posted by Comics Experience with Andy Schmidt at 12:03 AM