At one point, Workshop member, Joey Groah, tweeted that the BOOM! Studios panel audience had "@ComicExperience member overload" because we had so many folks there!

Baltimore Comic-Con is a fantastic show for comics creators on both sides of the table, with crowds that seemed record-breaking to us, perhaps due to the appearance of Stan Lee. But the large Artists Alley portion of the convention still allowed for lots of direct interaction with creators. 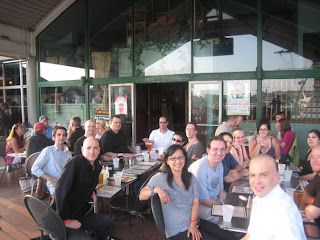 Saturday night, we held a Comics Experience Meet-Up at Tir Na Nog on the Inner Harbor with alums, workshop members, and friends.

It was great to have a "real world" get-together with friends who we interact with on a daily basis in our online classes and forums, but don't always get to see face-to-face (unless you count webcams)!

As you can imagine, much of the conversation centered around making comics, and it was clear a lot of exciting work is in the pipeline.

Thanks to everyone who joined us, and we look forward to the next Comics Experience meet-up at New York Comic-Con 2011!