San Diego Comic-Con may be the place for gazing at Hollywood stars, but it's also still a destination for those who create -- or want to create -- comic books.

Many great panels were offered for comic creators, covering topics such as getting news coverage, editing, breaking in, and indy marketing, just to name a few. Trickster, the "con-away-from-the-con," also had some excellent sessions directed to artists and writers. And the ICv2 Conference, held the afternoon before Preview night, provided insight into the latest industry numbers as well as the future of comics, digital or otherwise.

Comics Experience put on three panels at Comic-Con, attended by several hundred people over three days. In Breaking and Staying In on Thursday, Andy Schmidt (former Editor at Marvel and IDW) chatted with writer Mike Costa (G.I. Joe: Cobra) and artist Zander Cannon (Top 10) on their own "breaking in" stories, and how they've managed to stay in the industry over the years.

In the Building Your Art Portfolio panel on Friday, Andy, artist Reilly Brown (Incredible Hercules), and artist Zander Cannon (Top 10) discussed the do's and don'ts of building your portfolio and making the right impression with your work.

And during the Pitch Perfect panel on Saturday, Andy, John Layman (Chew) and Mike Costa (G.I. Joe: Cobra) provided advice on pitching. A highlight of this panel was hearing John describe how many times Chew was rejected -- as the crazy "bird flu, cannibal book" -- before it eventually landed at Image. It was especially ironic hearing John's story on Saturday, with Chew having just won an Eisner for the second year in a row the night before!

Comics Experience Creators Workshop members also caught up on Saturday night over dinner and drinks and had a lively discussion about everything from the Direct Market and digital to the latest super-hero movies. 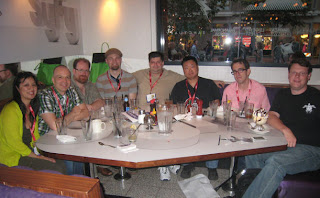 Also present at the meet-up were Bobby Curnow and Chris Murphy, who had to leave before we remembered to snap the picture!

One of the best parts of any convention is meeting up with people you don't get to see every day. Our thanks to everyone who attended our panels, hung out, or just caught up with us in San Diego!