On the Road and Spreading the Good Word! 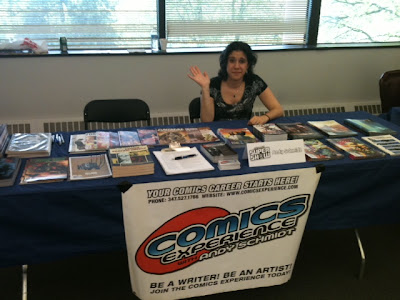 I've been woefully neglectful of my own blog lately and I apologize. I've been doing some good press stuff around Comics Experience and meeting lots of young and new comics creators. Part of an interview with me went live today on the popular DOLLAR BIN PODCAST. You can listen to it here. A great podcast in general, so be sure to bookmark it! I show up at about 12 minutes in, and there are other segments with me to come.

And just two weeks ago, I attended the COMIC GEEK SPEAK SUPER SHOW. The Comic Geek Speak podcasts are also an excellent free resource for comics fans and creators. Be sure to check them out too! 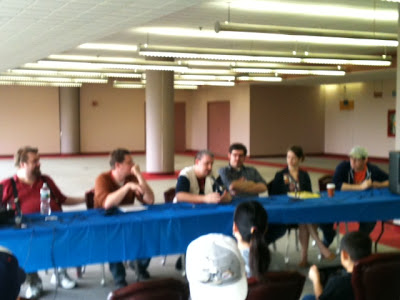 At the show, I conducted two panels for them that they have turned into podcasts for all the world to hear. You can listen to the one on Writing Comics here.

You'll see in the pictures here, that I wasn't alone. Also in attendance were CE alums who have been publishing their own books! Pictured here are Rob Anderson and Joe Sergi. Janine Naimoli who is producing her own book as well. You can see her manning the CE table there while I was away. Thanks, Janine!

With them were artist Dafu Yu and Josh Osborn. And Joey Groah, also a CE Alum and Workshop member was nice enough to record one of our panels. 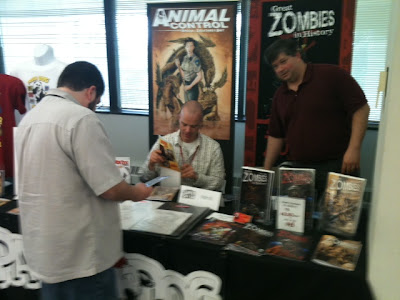 Along with alumni, we also had CE Colorist instructor Chris Sotomayor (pictured in the Breaking Into Comics Panel photo) and CE Comics Art instructor Robert Atkins. Both of these gentlemen joined me for panel discussions and both teach courses for Comics Experience and you can ask them questions as part of the Creators Workshop!

The show itself was an absolute blast. The last few years I've only been going to the huge conventions like San Diego Comic Con and the one in New York City. And those have gotten further away from comics. The CGSSS is 100% comics. Comics creators, comics fans, comics talk, comics merchandise--and run by the nicest group of people you'll ever meet. My thanks to the CGS folks for such a great time. 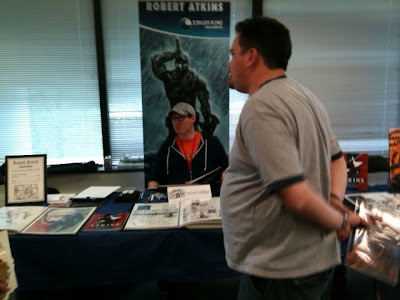 And it allowed me a chance to talk more one-on-one with fans and creators than I usually get to do at shows when I'm working for IDW or running large panels for Comics Experience. This was a real treat.

And I think it was great for the Comics Experience Creators Workshop. A lot of creators saw the value of what we offer in the workshop. Even if they don't all join the CE Workshop, finding a community, be it in person or online, who shares your interest in comics creation and helps encourage your art and your creativity and your passion, is just an immensely helpful and inspiring opportunity, I can't overstate the value of it.

We've recently added some new features to the Comics Experience Workshop, and I'll be talking about them in my next blog.

Andy
Posted by Comics Experience with Andy Schmidt at 7:37 PM